by Kevin Matthews
in Film Review

It’s almost impossible to hate E.T. The Textra-Terrestrial, isn’t it? Well, that’s what I have thought for years and years. Of course, I’d never watched the film in its entirety since that day that saw me leaving a cinema in tears, when I was seven or eight years old. When he first landed on Earth, E.T. was quite the cultural phenomenon. The box office takings were huge, and the merchandising money was probably even more impressive. Yes, the little alien had landed, and he’d touched all of our hearts. That’s how it seemed to me in my childhood anyway.

The story is quite a simple one. E.T. is left on Earth, where he eventually meets a young boy named Elliott (Henry Thomas). The two quickly develop a close connection, one so close that it seems dangerous when E.T. starts to show signs of ill health, but that connection is set to be severed whenever E.T. can figure out how to get home. It’s also set to be severed by a group of meddling scientists (including Peter Coyote, playing someone bridging the gap between the callous adults and the kindly kids). Elliott needs help to keep E.T. safe, help from his older brother (Mike, played by Robert MacNaughton), his little sister (Gertie, played by Drew Barrymore) and some friends (including a young C. Thomas Howell). But can the kids really do any good against numerous adults who think that they know better?

Directed by Steven Spielberg, and written by Melissa Mathison, this is the most Spielbergian movie that Spielberg has ever directed, for better or worse. It’s absolutely full of the best and worst of his tricks and his style. The score, by John Williams, may be a wonderful piece of work, but it also tells you exactly how to feel at almost every moment. Every other scene is coated in sunlight from “the magic hour” to emphasise that, whatever happens, this is a warm movie, fuelled by the dreams of childhood. The pacing and the tone are almost perfect for much of the film, especially when it comes to any scenes that have E.T. sharing the screen with Elliott or Gertie, but there’s no denying that older viewers will see all of the string-pulling going on, even if the final result remains effective. 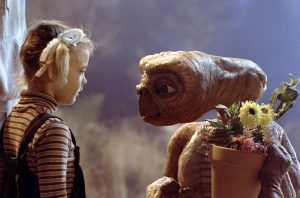 Thomas is a real winner in the central human role, with Barrymore doing her very best to steal the movie with her abundance of cuteness, but it’s good to remember that everyone onscreen feels just right for their character. Poor Robert MacNaughton is often overlooked, or forgotten about, but he’s exactly the kind of big brother that you’d want in that situation. Dee Wallace is the concerned mother (separated from the father of the children not all that long ago) and acts as any mother would, while the aforementioned Coyote seems menacing at first, but has some good intentions. And there’s E.T. himself, a wonderful creation, designed by Carlo Rambaldi, who never feels fake once audiences connect with him. Oh, and keep your eyes peeled for a very young Erika Eleniak as the girl kissed by Elliott. 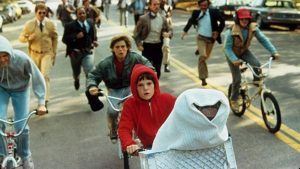 This film retains a lot of the magic that it had when it was first released. The flying bike that became the logo of Amblin Entertainment, the hilarious sequence showing E.T. trying out beer which leads to Elliott being drunk at school, the quick sketching of the family dynamic (most potently underscored by a scene in which Elliott is childishly, unthinkingly, cruel to his mother), the trip through the streets on Halloween and just any time that John Williams music starts to swell. It’s all wonderful stuff. It’s just a shame that we can’t all continue to see things through the eyes of our younger selves. 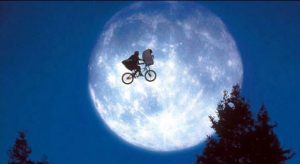 NB – I have been referring to E.T. as a male in this review, but Spielberg himself has said that the alien is more of a plant-like creature, not necessarily male or female.