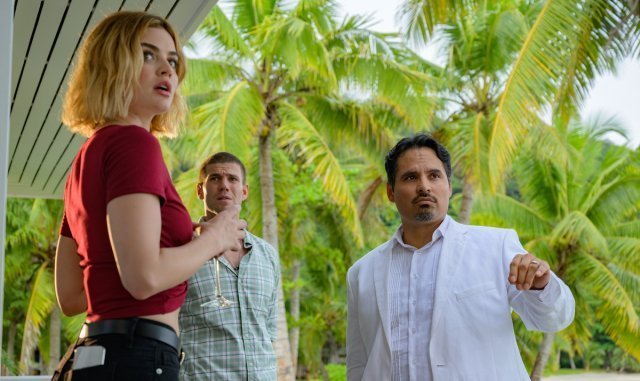 What is the sudden preoccupation with reviving nostalgic prime time shows from the American ABC-TV network line-up from the 1970’s and 1980s? One guesses that revisiting Charlie’s Angels for the umpteenth time was not good enough. Now the big screen treatment is given to the classic boob tube escapist resort gem from yesteryear in another Aaron Spelling-produced vehicle Fantasy Island…but with a so-called noticeable twist. What’s next? Perhaps Love Boat with sea-sick passengers? How about Hotel with extra pushy guests? Or maybe Finders of Lost Loves with alarming divorce rates?

Naturally, there is a vast fondness for reaching back to the heyday of television treasures from the small screen in hopes of capitalizing on the previous pop culture appeal looking to translate successfully for the current-day box office masses. Co-writer/director Jeff Wadlow (“Blumhouse’s Truth or Dare”) looks to pepper the wonderment of the Ricardo Montalban/Herve Villechaize guilty pleasure topical ditty from yesteryear with a dark stroke of scares for distinction. Not even including the late Montalban’s Mr. Roarke and Villechaize’s sidekick Tattoo through CGI-enhanced methods into the predictably tepid and tiring Blumhouse’s Fantasy Island can booster this whimsical waste of a pointless reboot.

Wadlow and screenwriters Christopher Roach (“Blumhouse’s Truth or Dare”, “Non-Stop”) and Jillian Jacobs (“Blumhouse’s Truth or Dare”) concoct a disjointed, joyless sci-fi fantasy flop armed with contrived stories of manufactured cheesy suspense that would not scare a cowardice flea off of a disabled sleeping mutt. Indeed, Wadlow’s turgid take on Fantasy Island is supposed to be of a nightmarish nod to wished fantasies gone bad. When one finds it fitting to resorting back to the memories of the old TV reruns for far more convincing escapist tendencies then this is certainly not a good sign for this overstuffed, cinematic travelogue tripe.

The idea behind the underwhelming Blumhouse’s Fantasy Island pretty much shares the same kind of philosophical concept as its small screen predecessor: strangers from all walks of life visit a mysterious island paradise in anticipation of realizing their most provocative wishes come true as they experience their embraced dream-like state of expectations. Some of the fantasies granted are satisfying accompanied by a message of hope. Other fantasies, sad to say, are not as forgiving or pleasant. Unfortunately, Fantasy Island lacks any provocative bite to its darkened whimsy as it skips over anything solidly poignant, probing or penetrating for the audience to care one way or the other.

Actually, as a horror movie studio it is kind of a crafty and perverse gesture for Blumhouse to take the soapy-minded confines of TV’s yesterday blueprint and add some sinister punch to its component. However, the twisted toxicity never quite registers soundly merely making Fantasy Island such a scenic bore of jittery jumps. White-suited host Mr. Roarke (Michael Pena, “Jexi”, “The Mule”) dispenses some cautionary wisdom to his guests when they begin to embark on an adventure of a lifetime–an adventure that is more like a field trip to the slaughterhouse.

At Fantasy Island, the guidelines must be followed and reinforced. The guests cannot change their minds and must see their selected fantasies through its entirety…good, bad, or indifferent. There is absolutely nothing that is going to stop the outcome of their requested fantasies whether the guests accept their eventual fate or not. Thus, the standby adage of “being very careful what you wish for…” It is safe to say that this sordid journey into mayhem is not your grandfather’s brand of Fantasy Island remembrance.

The breakdown of guests and their fantasized requests are served in conveyor belt mode. There is Maggie Q’s Gwen Olsen’s obsession with letting that special Mr. Right get away from her affectionate clutches. Hedonistic half-brothers Brax and JD Weaver (Jimmy O. Yang and Ryan Hansen) want to revel in the high life of big bucks and bouncing babes. Lucy Hale’s Melanie Cole wants some payback for all the tortured high school years that mean girl Sloane Madison (Portia Doubleday) bestowed on her in the past. Austin Stowell’s law enforcer Patrick Sullivan has unresolved daddy issues as he looks to travel the haunting exploits in his military father’s footsteps. So these lost souls look for Fantasy Island to complete their vacation needs. And an oversized rusty wrecking ball makes for a shiny ornament within one’s expensive penthouse apartment.

The memorable catchphrase from TV’s Fantasy Island was lovable Tattoo’s “Da plane, boss! Da plane…” It is too bad that everyone involved in this horrific hayride of a reboot could not jump on board this same plane and fly away from this tropics-induced turd.