Fast cars, muscular men and attractive women. It’s not hard to see the main appeal of the Fast & Furious movies, but I have to admit that it’s rare for a franchise to somehow keep managing to step things up a gear (no pun intended) with each subsequent instalment. While I had my problems with Fast Five, I still had enough fun with it to be looking forward to this next chapter. Well, it didn’t disappoint, although I admit that my reaction to the movie was positively affected by my decision, early on, to sit back and enjoy all of the ridiculousness onscreen without dwelling on every impossibility or moment that defied the laws of physics (and, boy, are there plenty).

Director Justin Lin has been steering the franchise along with confidence (again, no pun intended, honestly) since he was handed the reins for the third instalment, and with this outing he seems to take great satisfaction in seeing just how much entertaining craziness he can fit into each action sequence, and that attempt to keep throwing as much as possible onscreen really pays off. 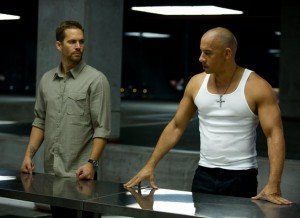 Almost everyone comes back from the previous few movies – Vin Diesel, Paul Walker, Dwayne Johnson, Michelle Rodriguez, Tyrese Gibson, Sung Kang, Gal Gadot, Ludacris and Jordana Brewster – and the main premise is set up impressively quickly. Hobbs (Johnson) is after a MAJOR villain (played by Luke Evans). This villain uses cars in the same way as our heroes, but his master plan is one that looks likely to cause some real danger to the free world, essentially, so Hobbs tracks down Dominic Toretto (Diesel) and asks him if he can assemble the gang and help him out. The reward? Well, as the fast and furious gang have spent some time trying to be relaxed and calm it looks like full pardons might tempt them into action.

I can’t think of too many moments in this movie that dragged, which is impressive considering that it runs for just over two hours. Writer Chris Morgan has a pretty easy job, I guess, but deserves a lot of credit for putting all of the pieces in place as quickly as possible, leaving room for action, action and then some more action.

The cast all do just fine, having fun with roles that they’re extremely comfortable with. Diesel and Walker continue to play off one another with a mix of testosterone and real affection, Johnson helps to add some heavy-hitting to the fight scenes, Evans is an entertaining, and charming, villain, and Rodriguez, Gadot, Brewster and Gina Carano are constantly given moments in which they show their strength and skills. 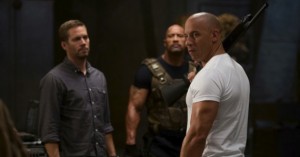 It’s going to be strange to see how the dynamic is changed in the next instalment, after the passing of Paul Walker two months ago, but this holds up as a fitting final outing for the whole gang. Whatever comes along next, and things are nicely set up at the end of this movie, will hope to feel just as smooth and speedy, despite being powered by a different engine (with James Wan taking over the directorial duties and the absence of Walker sorely felt by fans, I’m sure).

For now, enjoy this one. It’s fun, it’s rewatchable, and it’s ludicrously inventive. It also continues the franchise tradition of leaving logic and the laws of physics far removed from most of the main set-pieces, but this time around I found that I was bothered a lot less by the flaws while the audacious action held my attention.