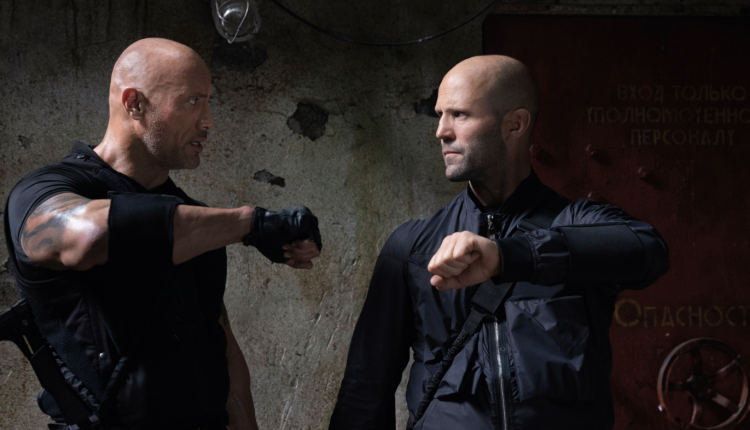 When DSS agent Hobbs and rogue agent Shaw faced off against each other for the first time in 2015’s Furious 7, the chemistry between Dwayne Johnson and Jason Statham was instant. So it is no surprise that this rapport has led to the first spin-off of the Fast and the Furious franchise.

It is fair to say that despite being relatively ‘new’ characters in the franchise, Hobbs & Shaw combines two of its biggest assets in its first spin-off. The banter between them in Furious 7 and The Fate of the Furious served to fuel fan anticipation for their own standalone film and led to financial success in the global box office. Needless to say, Hobbs & Shaw has nothing to lose.

Since the series started in 2001, its level of action has gradually grown in ambitiousness. The narrative has suffered as a result and Hobbs & Shaw fails to really improve this. The predictable plot is incredulous in places while Chris Morgan’s cheesy dialogue adds to the craziness of the film. But these lacklustre elements are to be expected and adheres to the franchise’s ‘mission’ to entertain, rather than deliver the dramatics.

Hobbs & Shaw gives audiences to see more behind their respective hard-man exterior and we see glimpses of their personal lives. Hobbs avoids getting nostalgic with his daughter while Shaw’s personal ties pose a threat to the mission. However, their testosterone-fuelled camaraderie shines as soon as they join the chase, with their macho interactions highlight their comedic skills and lift the film past its ‘pure action’ label. On the flip side, an impassive Elba hams it up as Lore, whose superhuman abilities make him delusional yet amusing.

One of the surprises in Hobbs & Shaw is Kirby, whose steely-faced Hattie is as much of a badass as the eponymous characters. Not only to shy away from a fight, but she also stands her ground and refuses to be painted as a victim.

With John Wick and Atomic Blonde under his filmography, director David Leitch delivers on what he does best. He cleverly makes the most of the settings to create creative action scenes, ranging from a chase around a disused power plant to a car chase across London. As a result, the thrilling sequences solidify Hobbs & Shaw as a crowd-pleaser.

The Fast and the Furious franchise has affirmed itself as a source of unadulterated entertainment and this spin-off is no exception. For audiences looking for a fun-filled summer blockbuster, look no further – Luke Hobbs and Deckard Shaw are at your service.

Fast & Furious: Hobbs & Shaw is out in UK cinemas on 1 August.