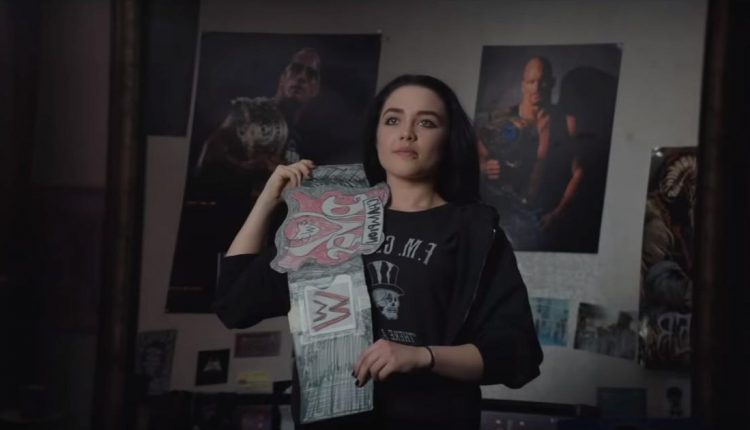 Fighting With My Family (2019) Film Review

Based on the 2012 documentary of the same name, Fighting With My Family sees the sole directorial debut of British comedian Steven Merchant. Starring Lady Macbeth‘s Florence Pugh, the film follows the journey of the Saraya ‘Paige’ Bevis as she leaves her hometown of Norwich to become a WWE wrestler.

With former WWE stars such as Hulk Hogan, John Cena, Dave Bautista and, of course, Dwayne Johnson becoming successful actors, having a film focusing on the world of female wrestlers is an unexpected turn.

However, Fighting With My Family works because it has all the elements of a classic underdog story: it has a protagonist who has the courage and determination to achieve their objectives. In this case, we have a young girl from Norwich who faces pressure from her family to succeed where they didn’t.

As the only daughter of professional wrestlers, Paige has grown up in the industry and therefore being around other wrestlers is second nature. It is clear that she has confidence and heart – but as the story progresses, it feels like this hardened background is almost a disadvantage, preventing her to be emotive and causing her to contemplate her choice.

The growing resentment from her brother Zak (Jack Lowden), seen as a source of comfort and support, doesn’t help either as he thinks she has taken away his hopes to be in WWE. Occasional bouts of peer pressure see Paige mull over her identity and whether she is truly made for the ring, which makes her story all the more endearing.

Marking a drastic change from her roles in Lady Macbeth and Outlaw King, Pugh shows she has comedic talent and the balls to take on a physical role. Frost and Headley provide light comic relief as Paige’s supportive albeit opportunist parents, while Lowden highlights the emotional angst of being denied a life-long dream.

Merchant’s script isn’t afraid to celebrate Paige’s British roots, while his direction keeps her in the foreground and the audience engaged. Executive producer Dwayne Johnson keeps his screentime to a handful of memorable moments, allowing Hutch Morgan (Vince Vaughn) to step up as the inspiration that Paige needs.

With a lot of heart and ever-consistent Pugh driving the story, Fighting With My Family is the most surprising feel-good film of the year so far.

Fighting With My Family is out in UK cinemas on 27 February.