Bruce Robertson (James McAvoy) is a nasty piece of work. He drinks excessively, he’s having sex with the wife of a colleague, he takes as many drugs as he can get his hands on, he makes obscene phone calls, he stabs everyone in the back and takes every opportunity to undermine others. He’s also an Edinburgh police officer. The plot of Filth fits very loosely around the central character. Robertson is looking to get a promotion, he’s trying to solve a murder, and he’s finding it harder and harder to hold himself together on a daily basis.

I read Filth a number of years ago. It was, and remains, a wild ride that made me laugh and cringe in equal measure. In fact, it always felt to me like a Scottish companion piece to American Psycho. Author Irvine Welsh has been entertaining and shocking people for years now, and when he’s firing on all cylinders there are few who can top him for inventive debauchery. In this film, director Jon S. Baird is helped by his own adaptation of the novel in creating a pitch black comedy coated in sleaze that will satisfy both film fans and, as far as I’m concerned, fans of the novel.

He’s helped immensely by the central performance from McAvoy, a career-best turn that sees the actor revelling in an opportunity to play someone so irredeemably awful and unpleasant, while also steering him on a path that allows viewers to somehow still enjoy his onscreen antics (and antics really ISN’T the word I should have used there) and will him to change from that state of irredeemable awfulness to a state of general awfulness with a chance of redemption. McAvoy, in turn, is helped immensely by the support from a wonderful selection of great British (and, indeed, largely Scottish) actors: Jamie Bell, John Sessions, Eddie Marsan, Shirley Henderson, Imogen Poots, Emun Elliott, Gary Lewis, Shauna Macdonald, Kate Dickie, Jim Broadbent, Joanne Froggatt, Brian McCardie, Martin Compston and Pollyanna McIntosh, to name most of them. Standouts include Marsan (who gets to do some great comedy work), Henderson and Poots (who play two very different women dealing with Robertson), and Sessions as the boss of the main character, alternately managing his colleague and being obliviously manipulated by him.

If you watch the opening scenes of Filth and don’t think it’s for you then just don’t try to get through the rest. In fact, if you are unsure about the movie because of the title then you’d be advised to proceed with caution. The movie doesn’t hide the fact that it’s going to be unpleasant, dark and often uncomfortable. It throws in some enjoyably surreal moments to take viewers further into the mindset of the lead character, uses a great soundtrack to keep the energy levels up in many scenes, and just keeps rattling along at such a breakneck pace that even the mis-steps (such as the character played by Jim Broadbent) aren’t enough to drag the movie down too far. 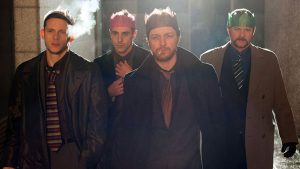 I wanted to like this movie, but I tried to keep my expectations low, based on the previous hit-and-miss results of movies adapted from the writings of Irvine Welsh. Thankfully, this is a hit. In fact, it’s second only to Trainspotting as my favourite filmed version of his work.

Filth arrives on a variety of formats on 10th February here in the UK. Whether you go for the download, DVD or Bluray, same rules apply.

by William Stottor
No Result
View All Result