Finsterworld is an interesting film, full of some great moments. It just, sadly, doesn’t come together to make anything great. Many will disagree with me, but I feel that Finsterworld fails at what it sets out to do. Mainly due to not being focused on whatever it’s setting out to do.

There’s a man (Michael Maertens) who runs a business providing home pedicures, and his favourite customer is an old woman (Margit Carstensen). There’s a man who lives in the middle of the woods, and seems at his happiest while nursing an ill bird back to life. There’s a young woman (Sandra Huller) growing increasingly frustrated as she tries to make a documentary about someone who doesn’t seem all that willing to provide any information. Her boyfriend (Ronald Zehrfeld) is a police officer who also has a strange fetish that he’s struggling to confess to. A husband (Bernhard Schutz) and wife (Corinna Harfouch) are driving between destinations in a large rental car. And a bunch of schoolchildren (including three played by Jakub Gierszal, Carla Juri and Leonard Scheicher) are being taken on a trip to see a concentration camp. All of these people are interconnected in some way, and all of them will go through some major changes as the movie unfolds. 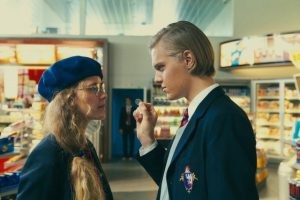 Despite the solid direction from Frauke Finsterwalder, it becomes obvious that the biggest problem with Finsterworld is the script, co-written by the director and Christian Kracht. It’s not the dialogue that spoils things, but the major shifts from light comedy to dark drama. If the intertwining narrative had been more fractured, and given even a suggestion of the turns coming up, then it might have worked. I’m sure that Finsterwalder and Kracht were hoping to give viewers a punch in the gut. Well, they manage, in a way, but it’s unearned, it’s unsatisfying as a viewing experience, and it’s deeply unpleasant. For me, there’s one moment here that ranks among the most awful things I’ve seen onscreen. Part of me respects that, and the shock that it gave me, but another part of me resents the writers for going down the route of “cheap shocks” when they seemed to have more intelligent points to make.

The performances are uniformly excellent, with Michael Maertens, Margit Carstensen and Corinna Harfouch being the standouts, and there’s plenty here to provoke thought and debate, which makes that major mishandling of the tonal shifts all the more irritating. It’s not that the writers have nothing to say. It turns out, I suspect, that they have so much they want to put across that things get overcrowded and muddled. I think that Finsterwalder then stayed too close to the material while directing, ensuring that the details were lost in amongst the big picture.

It’s a film mainly about identity, national and individual. Which makes it a great pity that it ends up with an identity crisis of its own.