Oh, what a treat it would be to be young again. To be so easily entertained by anything kid-friendly that was churned out by Disney and to enjoy spending time with characters that older people might class as annoying. I used to love Flight Of The Navigator. I’m sure I’m not the only one. Revisiting it, however, shows just what a weak film it is. It’s a film so lightweight and pointless that nobody should be surprised when it all ends with a sputtering whimper as opposed to something more energetic and cinematically satisfying. 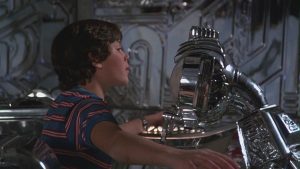 Joey Cramer plays a young boy, David Freeman, who goes missing one night and then reappears eight years later. David’s reappearance prompts a number of questions. Why can’t he remember where he has been? Is he connected in any way to a mysterious object that has just been discovered by scientists? And, perhaps most importantly, why hasn’t he aged one little bit? His mother and father (Veronica Cartwright and Cliff De Young, respectively) don’t care, they’re just happy to have their boy back. David’s brother, Jeff (Matt Adler), doesn’t care either, although it’s very strange for him, having been the younger brother and now being the much older sibling. The people who care the most are the scientists. They want to find out just what has happened to David, and they want to find out more about their mysterious object. Coincidentally, the mysterious object wants David to return to his role as . . . . . . . . . . . . Navigator. That may not be possible, however, if David can’t remember anything. 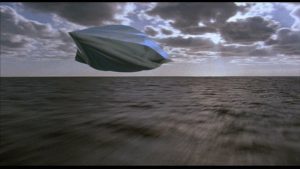 Written by Michael Burton and Matt MacManus, based on a story by Mark H. Baker, Flight Of The Navigator is made up of typical elements from “The Big Book Of Boy’s Adventures.” Young David rebels against some nasty authority figures until he gets more freedom than any kid his age could ever wish for, he’s also told that he’s cute by a just-older-than-teenage Sarah Jessica Parker, and there’s a cool spaceship that also has some bizarre creatures hidden on board. Oh, and fireworks.

Director Randal Kleiser has some fun with the story, and some fun referencing some of his past work, but that fun doesn’t often infect the viewer. Without wanting to sound too harsh, that’s mainly due to the main cast members. Joey Cramer is slightly irritating as David, and that feeling is exacerbated when he finally teams up with Max (a main component of the spaceship, voiced by Paul Reubens – billed as Paul Mall). Veronica Cartwright, Cliff De Young, Matt Adler, and even Sarah Jessica Parker all do okay, but the movie isn’t about them. It’s about David and Max.

A couple of the dated special effects remain enjoyable, it’s fun to hear the word “Pixar” in a Disney film in the same year that Pixar officially named themselves Pixar (coincidence? I like to think not), a couple of comedy moments work and there’s an excuse to hear a bit of “Surfin’ USA.” 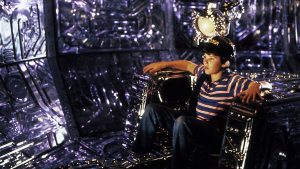 But none of those things make this movie the unmissable modern classic I thought it was when I was about twelve years old.