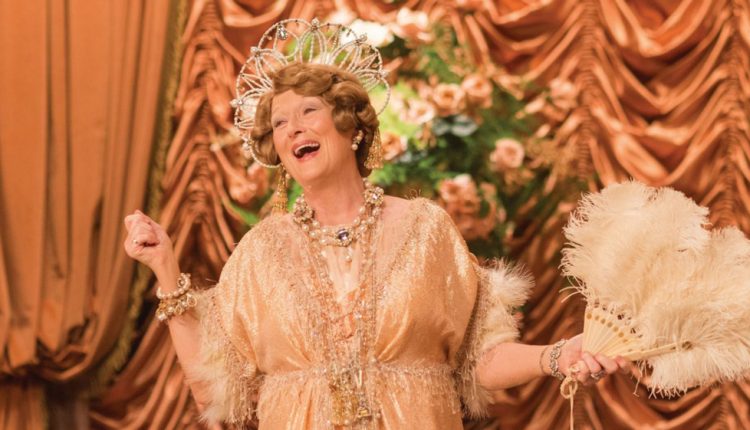 With features such as Philomena, Mrs Henderson Presents and The Queen in his filmography, British director Stephen Frears has successfully brought real lives to the big screen, ‘celebrating’ historically famous women to audiences worldwide. His latest project focuses on an American socialite, who was once dubbed ‘the worst singer to appear in Carnegie Hall.’

Played by Meryl Streep, Florence Foster Jenkins is an eccentric heiress and classical music lover in New York. Inspired to hold a operatic concert, she and her husband St. Clair Bayfield (Hugh Grant) hire aspiring pianist Cosmé McMoon (Simon Helberg) to accompany her. Unfortunately, he quickly learns she is a tone-deaf singer and due to St. Clair’s bribes and interventions, she has no idea. As her supposed reputation as a singer quickly progresses, St. Clair and Cosmé begin to struggle to protect her feelings.

On the face of it, the whole story feels like a farce. The plot grows in incredulity as the depth of St. Clair’s deviousness is slowly revealed, and despite it being based on true events, it is hard to believe how Florence was so blissfully unaware for so long. Her fragility from a past bout of syphilis plucks the heartstrings of those closest to her, yet in the midst of lies, Florence’s passion ultimately wins over the haters and mockers…regardless of how badly she sings.

Streep carries the film as the eccentric eponymous character, managing to balance Florence’s fragility and charm to create an empathetic character. Hugh Grant’s seemingly devoted St. Clair brings an emotional yet ambiguous conflict to the relationship, while Helberg’s awkwardly delightful Cosmé brings humour to the mix. Mission Impossible – Rogue Nation‘s Rebecca Ferguson is also a welcome addition as St. Clair’s long-suffering girlfriend Kathleen. While she represents his ‘other’ life, she is probably the most honest character in the whole feature.

Overall, Florence Foster Jenkins is as charming as the eponymous character, with Streep in her quirkiest performance yet.

Florence Foster Jenkins is out in UK cinemas on Friday 6th May.