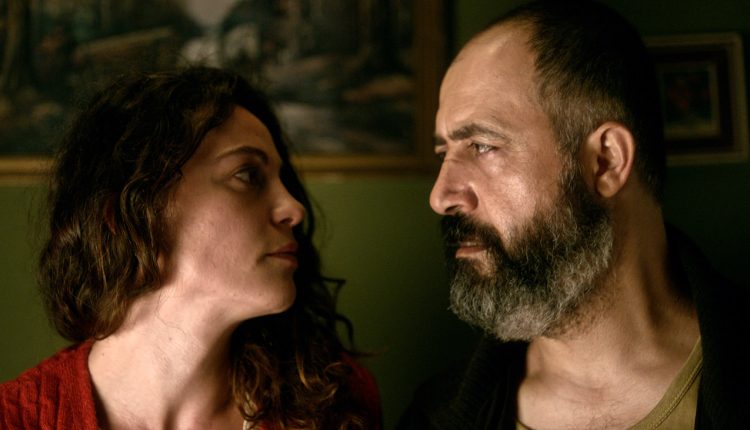 Terror reigns in Emin Alper’s nightmarish vision of Istanbul. Bombs explode regularly leaving frantic emergency services scrambling to the next disaster zone. The military are out in force and a climate of fear has descended over the city. Everyone operates alone, fearful of others, fearful of themselves. Fostering an environment of nauseating tension, he creates a frightening world in which two brothers find themselves locking into a collision course that can’t but end in catastrophe.

Explosions greet the opening scenes, followed by sirens. The authorities have lost their grip on the situation, and are turning to desperate measures. It’s why they release middle-aged Kadir (Mehmet Ozgur) from prison. He’s to work for the intelligence services, sorting through rubbish for evidence of homemade bombs. Such is his relief at release, he accepts, finding himself posted near his youngest brother Ahmet (Berkay Ates).

It’s a reunification that doesn’t remain happy for long. Ahmet sets his brother up with a nearby flat, and they initially dine with neighbours Ali (Ozan Akbaba) and Meral (Tüllin Özen). Ahmet has his own problems that soon drag him into isolation. He’s employed by the state to shoot stray dogs, even though local officials maintain they are tranquillised and re-homed. In reality, he guns them down and dumps the bodies in a hole. But it’s sickening work, and he finds his nerve faltering. When a missed shot allows a dog to escape wounded, he takes it in and secretly cares for it.

Shooting in confined spaces and in shadowy streets, Alper and his cinematographer Adam Jandrup create claustrophobic unease. At one stage, Kadir accompanies Ali to an illicit bar where he comments on the changes since he went to prison. People now seem to live lonely, separate lives, afraid to stick their head above the parapet. Frenzy takes this as its central thread, pulling away until Kadir and Ahmet have completely unravelled.

Kadir suspects everyone of crimes, submitting rambling reports to his handlers. He wonders about Ahmet’s nocturnal habits, and believes he’s stumbled across his middle brother, missing the past ten years. As more bombs go off, pressure is heaped on him. Come up with intelligence or go back to prison. His attention turns to his neighbours, and to Ahmet who’s unravelling on his own. Early on, we see him sticking a gun in his mouth. The dog seems to hold these impulses at bay, although he’s up to some strange home renovations at the oddest of hours.

Alper splits the timeframe, showing the same events from both perspectives, and introducing a number of delusional sequences. It becomes difficult to work out what’s real for both of them, although in a way it doesn’t matter. As far as the two brothers are concerned, what they’re experiencing is real.

It does get too confusing at times, and Alper takes a few short-cuts elsewhere to get his point across. The moment Ahmet is seen sighting a dog with his rifle, it becomes clear he’ll take one in. It’s a trite, though undeniably effective device. The addition of a third brother on the other hand, real or otherwise, is a step too far, adding intrigue on top of intrigue.

Despite the dark tone, Alper finds occasional cause for levity. When Ahmet is called into the manager’s office, he’s berated for hiding dogs. Terrified, it soon emerges he’s been mixed up with someone else. The boss only wanted to thank him for his hard work. On the whole though, paranoia reigns across Frenzy, and it’s likely to infect anyone who comes near.