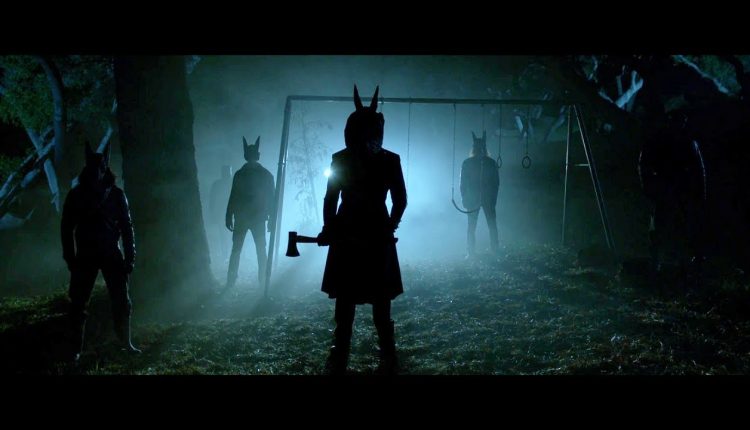 Watching some films you can’t help question the reasoning for – or even legitimacy of – its subject matter being used in what is, after all, a source of entertainment. Take for instance Jackals, the new horror / thriller from director Kevin Greutert and writer Jared Rivet. Slickly produced, short enough not to bore, and featuring a cast who imbue their characters with realism and believability, the film none-the-less culminates in an onslaught of such brutality and sadism that by the end you, along with the central protagonists, are begging to be put out of your misery. Indeed – sorry to say – any of the film’s saving merits are soon numbed by an onslaught of onscreen violence seldom seen in even the most hard core genre offering.

Desperate to save his son Justin (Ben Sullivan) from the clutches of the twisted Jackal cult, Andrew Powell (Jonathon Schaech) kidnaps him, and takes him to the family’s remote forest retreat. Here with the help of his wife Kathy (Deborah Kara Unger), other son Campbell (Nick Roux), Justin’s girlfriend Samantha (Chelsea Ricketts) and a cult deprogrammer called Jimmy Levine (Stephen Dorff), Andrew hopes to bring back the son he loves. But before long Justin’s other ‘family’ come looking for him, with bloody and horrific results for all.

It has to be said the public has been able to deal with much material throughout horror film history, because it has been perpetrated either by monsters, or people so distorted by life’s experiences that they no longer resemble humans as we know them. The modern trend however towards otherwise normal seeming villains who go out to harm and maim their fellow man simply, it seems, through their perverted delight in making others suffer, is truly disturbing. Films like those from the Saw and Hostel franchises, like to make you think they have true legitimacy behind the horrors which their protagonists mete out on their often innocent victims. However, though they may try to excuse their violence with storylines of justifiable vengeance, when it boils down to it they do it simply because they enjoy causing pain and distress.

Which seems the case with the violence at the heart of Jackals. Though it can be seen why the carnage occurs – and be assured, though it takes its time coming, when it does the brutality is ferocious and unrelenting – that in no way excuses the viciousness with which it plays out on screen. Like the traumatised couple in Sam Peckinpah’s notorious Straw Dogs (1971), the family at the centre of Jackals are pushed towards breaking point, one assumes, to illustrate just how far a person will go to protect the ones they love. The cult members on-the-other-hand, clearly enjoy torturing and frightening people seemingly ‘weaker’ than themselves, in order to show they dominance and superiority. These reasons, one imagines, would be the ones given by the film’s makers if asked for the logic behind their production. But does this really excuse the bludgeoning of one character, scalping of another and almost ritualistic burning and maiming of a third, being drawn out and lingered upon.

The film is spiced with interesting and effective approaches: the members of the Jackal cult intensify their sinister and menacing air by never uttering a single sylabul throughout the whole film, whilst the opening abduction by the Powell’s of their brainwashed son is not initially explained, leading the viewer to the conclusion that they themselves are some kind of freakish, backwood’s family. Unfortunately these touches are insufficient to save a film which in the end is little more than a stylish and tightly choreographed exercise in unrelenting nastiness.

Jackals receives a limited release in America in September, 2017.