Frightfest 2017 hosted the European Premiere of Royce Gorsuch’s feature-length debut, the reality-altering Mindhack: #savetheworld.Or did it? It did.

Lauded as a cross between Hackers and The Rules of Attraction (it’s not), Mindhack finds an unbelievably good-looking and hench computer nerd trying to map the human mind in order to eradicate mankind’s predilection for destruction.When his mind projects a more confident, driven and ruthless version of himself into reality, the shit gets real. Sort of. 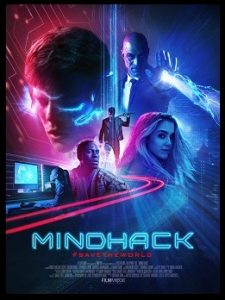 Aspirations as lofty as this were always going to be difficult to attain; the moral dilemma that accompanies the ability to play God is painted with broad strokes, glossing over the intricacies that the film sets out to explore. In order to reset mankind, there’s a code which needs retrieving, there’s a headset that needs stealing and before you know it, it starts to feel like it’s buffering.

This isn’t helped by the inconsistent performances of the leads. Online anarchist Mason (Legend‘s Chris Mason) and his own personal Tyler Durden Phin (Euro Trip’s Mechlowicz) flit from good performances to read-throughs and back again, whilst Sawyer (Resident Evil: Extinction‘s Spencer Locke) is all wide-eyed girl next door but given little more to work with. However, Faran Tahir’s Eden has fun chewing the scenery as the main antagonist (who may or may not be another of Mason’s projections), armed with a gizmo he may just have stolen during his time on the Iron Man set.

That being said, this film may find a cult following of sorts. It’s visually striking: fast and frenetic cuts (although used too frequently) progress the narrative as well as contribute to the hi-tech tone; the Matrix-esque sequences when characters ‘glitch’ or have their mind’s hacked are simple but effective and the technology looks suitably DIY. Make sure you keep your eye out at future Comic Cons for anyone in a light up metal fox mask as the film’s most memorable image is sure to live on. 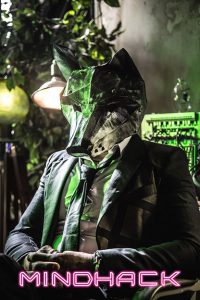 Alongside this, director Gorsuch uses several neat devices that engage the viewer; the real-time social media comments and video reactions to Mason’s plans place the characters firmly in the real world, making the unbelievable believable. Larry Granite’s soundtrack, although at times overbearing, is often a delicious mix of Disco and Dial Up and an interesting accompaniment.

But whereas the above are advantages in the here and now, there’s the distinct feeling that this may feel flash-in-the-pan and very of it’s time (see the aforementioned Hackers and The Lawnmower Man). For further evidence, see the hashtagged title. Just sayin’, obvs.

Mindhack has some moments of inspiration but ultimately little else which will stick in the memory.

Trailer Park: Yorgos Lanthimos Goes Back In Time For The Favourite