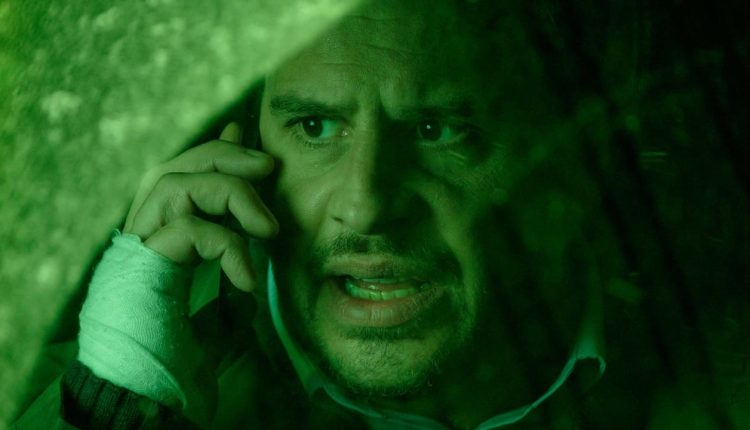 Forensic pathologist Paul Herzfeld (Moritz Bleibtreu) is on the trail of a serial killer who has abducted his daughter Hannah (Barbara Prakopenka) and hidden her on a remote island off the north coast of Germany. With the help of Linda (Jasna Fritzi Bauer), a young comic book artist with more than her fair share of personal problems, Paul unearths a trail of gruesome clues – which the killer hides within the corpses of his victims – in the hope they will lead him to his daughter before time runs out.

Cut Off – the new action / horror from German director Christian Alvart, is certainly not for the squeamish. There may be no gore in the generally accepted horror film sense – no one is slashed, chopped or beheaded by rampant aliens or monstrous animals gone wild. What it lacks in in-your-face carnage however, it more than makes up for with disturbingly realistic portrayals of autopsy and operational viscerals – if the site of real-life mutilation turns you off then this film is most likely not for you.

Cut Off really amounts to little more than an excuse to link each forensically detailed autopsy – of which there are several – with the next, by means of a storyline featuring two central characters – Paul and Linda – with turbulent personal lives which are never fully explored. Paul is clearly separated / divorced from Hannah’s mother, and his relationship with Hannah is anything less than stable, resulting in the usual internal anguish, guilt and self loathing he suffers after her abduction. As for Linda who is trying to escape the unwanted attentions of a lunatic ex-boyfriend – a sub-plot which, being never fully developed, raises questions as to the need for its inclusion in the first place – there is little depth to her character to make the viewer feel anything more than a superficial sympathy. Bauer – a young Swiss actress with an impressive number of credits to her name – displays a suitable degree of moody hysteria as the carnage unfolds, but is ultimately forgettable once the end credits roll.

Despite a clever storyline threading together the various subplots, you can’t help feeling the whole thing is trying too hard to be clever. With so many characters – some of whom never physically appear – added you feel to form a backstory that makes the central characters more three dimensional, by the end, unless you’re taking notes, there is every chance of viewer confusion. That’s not to say the main thrust of the action doesn’t come through, simply that much of its colour is dulled by an overuse of the writer’s brush.

This film could be seen as an interesting addition to the gritty Nordic Noir genre which shows no sign of waning in popularity amongst today’s film lovers. Except it sin’t – Nordic Noir that is. Though all the important elements of the said school of crime thriller film are present – snowy landscapes, island setting, angst ridden, moody central characters and psychotic killers with a penchant for grisly mayhem – the action takes place in Germany, a country which, if the story here is anything to go by, shares much in common with its Northern Neighbours.

But really the film’s German setting is irrelevant – it could, in theory, have taken place on any windswept landmass cut off from civilisation by sea and storm. Which sums up the film as a whole – a story with a sense of separation from reality where, by the end, its central protagonists are as much of an enigma as when you are first introduced to them.