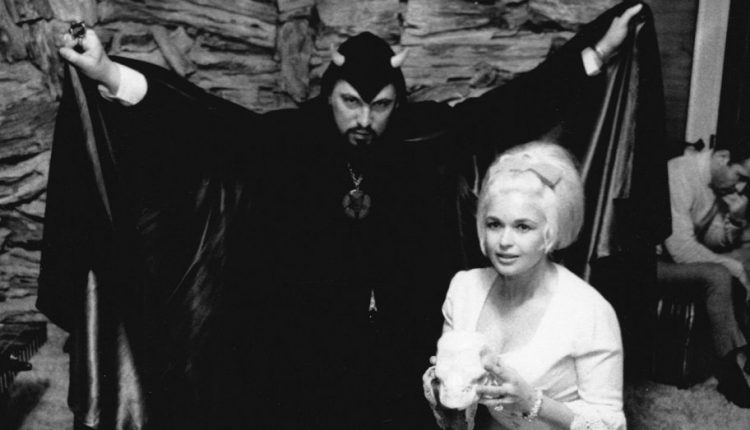 Perhaps this new documentary / Hollywood exposé would have been better entitled ‘Mansfield / LaVey 66/67’. Though its focus is clearly based around the confused and troubled final years of the American starlet Jayne Mansfield, much of the second half is given over to her relationship with her friend, the infamous San Francisco Satanist Anton LaVey. Indeed it is the film’s investigation of the actresses connection with the founder of the Church of Satan, which probably warrants its inclusion at a horror festival such as FrightFest.

If, like most people, you know Mansfield better for her publicity seeking lifestyle out of the movies, this documentary will do little to enlighten you further about her celluloid career or, to-be-honest, the real person behind the myths. Here there is little revealed about her early life and career, other than that she was a fame hungry ‘B’ movie actress, who played on her striking similarities to the star of the era Marilyn Monroe, to compensate for a rather dubious acting ability, and make a comfortable living in the process.

Clearly however an in-depth bio-pic a la Lifestyles of the Rich & Famous was never the intention of documentary makers Ebersole and Hughes. Instead, the two men – obviously ardent Mansfield fans – have brought together a mix of fact and fiction, animation, archive footage and first-person interviews, to create a portrait which, though  likely embroidered to add colour, is never less than entertaining.

The collection of talking heads sharing their opinions include a veritable pantheon of learned film and feminist scholars, faded Tinseltown sex-kittens – like Mamie Van Doren – and industry legends – such as acid tongued filmmakers John Waters and Kenneth Anger and Hitchcock babe Tippi Hedron. Together they divulge a collection of tales and anecdotes based on what the film’s poster itself admits is little more than rumour and hearsay.

What makes the film interesting however is the introduction of Mansfield’s connection with LaVey and his group of occult followers. Forget her string of husbands and alleged lovers, whose involvement with her seems to have done little to further her career prospects or, more importantly, her mental health and wellbeing. Instead it was LaVey who maintained the strongest hold over the fading actress and who (if legend is to be believed) may have put a curse on Sam Brody – the actress’s lawyer and final companion – which led to both their deaths in a car accident in 1967.

Watching the documentary, you are left with the impression that the truth behind many of the ‘stories’ concerning Mansfield, have been blown out of proportion in the years since her passing. However, as with other famous blondes who died before their time – such as Monroe and Diana, Princess of Wales – Mansfield’s untimely and tragic death was, as the marvellously camp and fascinating Mansfield 66/67 reveals, possibly the best career move she could have made.