Not to be confused with THIS movie.

Lots of people have been dying to tell you just how good Frozen is. It is, apparently, the best Disney film in years, with the best songs, too.

Frozen is good. There are moments when it is very good. But, personally, I liked both The Princess And The Frog and Tangled much more. And I enjoyed the songs in those movies more than almost anything in this film, with the exception of the highlight, “In Summer”. 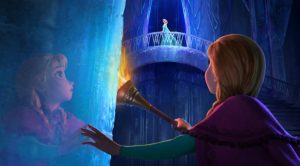 Based loosely on “The Snow Queen” by Hans Christian Andersen, this is the story of a young woman (Elsa, played by Idina Menzel) with a great, but also potentially dangerous, power. She can freeze things around her, creating snow and ice from nothing, until all around her is a winter wonderland, so to speak. Her sister, Anna (Kristen Bell), loves this, but the fun and games stop after an accident occurs that makes Elsa think that it might be for the best if she keeps herself to herself. She does so, for years and years. But it’s only a matter of time until an accident in public causes some spontaneous ice creation and major embarrassment and upset for Elsa, who then runs away, leaving her home caught in a permanent wintry state. Anna decides to go after her, and is helped by a man named Kristoff (Jonathan Groff), his reindeer, and a snowman named Olaf (Josh Gad).

Frozen gets a lot right, there’s no denying that. The look of the movie is as gorgeous as you’d expect, and the main characters are good company, especially the lovely Olaf, all voiced well by suitable, and capable, performers. But something is just missing from the mix. Perhaps better vocal performers would have helped, but I doubt it (and let me be clear that everyone here does very well, with Bell being especially wonderful, and I have forgotten to mention Santino Fontana as Hans). Better musical numbers would have helped, although almost everyone in the world disagrees with me there. 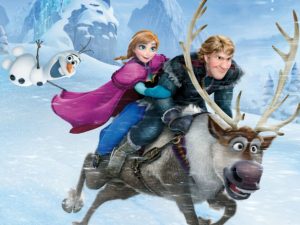 Directors Chris Buck and Jennifer Lee (who co-wrote the screenplay with Shane Morris) do a perfectly fine job, but they just don’t mix everything together in such a way that made me think it was truly great. Despite my gripes, however, it is certainly a good film. It’s perhaps just more a comment on the high standards of modern animated movies that good films really have to be great to elicit higher praise from me nowadays.

Frozen IS fun for all the family. But it’s not the best Disney film in years, in the opinion of this particular reviewer.