by Katie Smith-Wong
in Film Review

One of the top films in this year’s Sundance Film Festival was this intense début from Sundance Labs filmmaker Ryan Coogler and producer Forest Whittaker.  Based on the true story of Oscar Grant, a young man who was fatally shot by police on New Year’s Day 2009, Coogler’s film has already won rave reviews in the US and signifies an amazing dramatic turn for Michael B. Jordan.

Fruitvale Station retells the last day of Grant (Jordan), which mainly revolves his interactions with his girlfriend (Melonie Diaz), his mother (Octavia Spencer) and friends.  As he intends to move away from his criminal past and reconnect with his loved ones, tragedy strikes.

Coogler wanted to bring Grant’s final day onto the big screen, telling the untold story of a normal guy that ended up being in the wrong place at the wrong time.  Whittaker got involved in the production after meeting Coogler, who worked with Sundance Labs to develop the script.  The fact that Fruitvale is an independent début makes it a change from the high-profile blockbusters, which repeatedly dominate the box office. 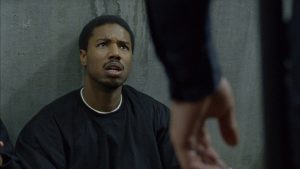 Looking at the media coverage of the incident, it appears that the shooting itself was not widely reported outside the US.  This brings a sense of intrigue around the victim and with the involvement of police behind the shooting of an Afro-American man, the idea of socio-racism obviously comes into play.  However, this is not insinuated – Fruitvale Station, instead, celebrates the idea that a former criminal wants to move on and aspire to the future, instead of wallowing in the roadblocks his background has created.

The great cast plays their part with emotion and realism.  Jordan plays the almost-frustrated Grant with heart regardless of the little glimpses into his criminal past, the film revolves his willingness to reform and stand by his loved ones, painting him as a normal everyday guy.

There is a constant dread and anxious tension, knowing that the climax of the film while Coogler doesn’t build his film around this feeling of impending doom, but instead recreates the film as a modern-day tragedy.  The themes of community and friendship are consistent throughout the film, and as the film draws to its emotional close, the common loss felt by Oscar’s mother, girlfriend and friends resonates past the screen.

Fruitvale Station is courageous, heartbreaking and will surely lead its director and lead actor into the greatness.

Fruitvale Station is out in UK cinemas on 6th June.