There’s an okay script here, decent enough direction from Scott Cooper, and some great performances from all of the main cast members, but Out Of The Furnace just can’t do enough to make it feel like anything other than a gender-flipped version of Winter’s Bone.

Christian Bale is Jennifer Lawrence. Okay, he plays Russell Baze, a hard-working man who wants to do his best to look after his family, which includes his terminally ill father and his wayward brother (Rodney Baze Jr, played by Casey Affleck). Unfortunately, he’s unable to do that when an accident lands him in jail for a number of years. When he gets out, certain things have changed (his partner, played by Zoe Saldana, is now with someone else, and Rodney is finished with the military service that kept him away from their small town for long periods of time), but many things have also stayed the same. Russell returns to his job at the steel mill, Rodney continues to get himself into trouble and, slightly further afield, a man named Harlan DeGroat (Woody Harrelson) deals in drugs, violence and death. Rodney is about to meet Harlan, which means that Russell will soon want to meet him too. 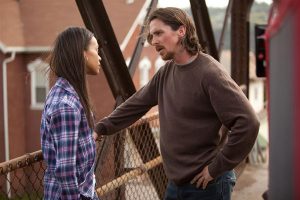 Much like American Hustle, this is pretty flimsy stuff elevated by some great acting. It’s more controlled and streamlined than David O. Russell’s movie, but the end result is very similiar, mainly due to a disappointing third act that just doesn’t prove either as satisfying or as effective as it should be, leaving it quite anti-climactic.

The script, co-written by the director and Brad Ingelsby, does a good job of sketching out the main characters, but then leaves them without anything worthwhile to say. The movie may show action being taken when words are useless, but it’s a shame that the script feels incomplete and underdone. It’s not lazily written, far from it, but viewers may feel that they are only ever being shown half of what is going on.

Thankfully, Bale is fantastic in the main role, and his caring, good-natured character is offset by Harrelson, being equally fantastic as DeGroat. Affleck isn’t someone I’ve always enjoyed seeing in movies, but he’s started to build up a solid body of work, and his turn here is another good one. Willem Dafoe stands in the middle of these main characters, playing the shady, but not actually evil, John Petty, and Forest Whitaker is as reliable as ever, portraying a local Police Chief. Saldana isn’t given that much to do, which is a shame, but she’s always a welcome presence, and acquits herself capably in her role.

Cooper doesn’t make any major mistakes with his direction. There are just a lot of minor touches that add up to make this a missed opportunity. It’s an underwhelming film when it should have been a powerful, yet still low-key, movie. Worth a watch for the central performances, there’s really nothing here to make it memorable or worth revisiting once you’ve seen it.

Out Of The Furnace opened in UK cinemas on January 29th.