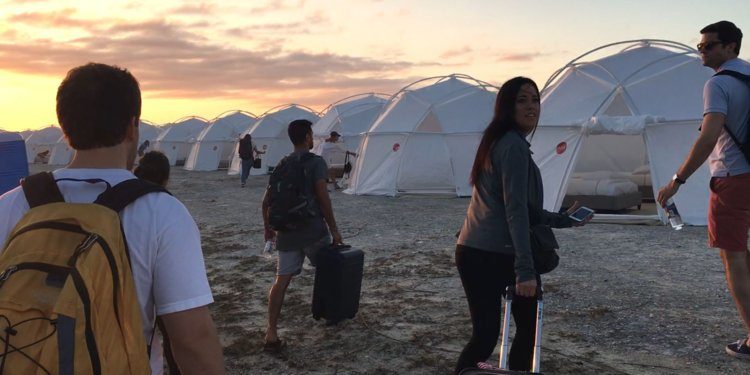 In 2017, a music festival in the Bahamas made headlines for ripping off its customers. Organised by entrepreneur and Fyre Media founder Billy McFarland, the Fyre Festival promised gourmet meals, luxury tents and beachside villas. Instead, there were poorly built tents, no food or water, and attendees were ultimately stranded on the island. Two years later, documentary filmmaker Chris Smith delves deeper into the scandal.

From the outset, we see McFarland as a playboy who indulges in the luxury lifestyle. However, he finances this by conning millennials into buying VIP experiences. Starting from his members-only card club Magnises, we see him promise this world of exclusivity but gives nothing in return. This need to appear super-rich serves to feed his delusional approach to the festival and irrefutable denial to its organisation. It is not until an interviewee seriously outlines the worst-case scenario that the penny drops – Billy McFarland is an insane idiot with dollar signs for eyes.

Fyre also highlights the power of commercialised social media. It all starts with an elaborate promo video with models such as Kendall Jenner and Bella Hadid. Afterwards, McFarland reaches out to Instagram influencers to share a promotional image in exchange for a ‘luxury’ villa at the event. The fact that no-one knows anything this event yet it quickly sells out demonstrates a need to be with the ‘popular’ kids and the effect influencers have on millennials.

In addition, McFarland’s business relationship with Ja Rule comes across as a high-end bromance, and their decision to promote an event is both impulsive and ambitious. Although McFarland isn’t among the interviewees, those that do appear (such as former employees and associates) conclude that neither McFarland or Ja Rule have no idea of how to organise the event. As a result, they end up dumping the project onto those with everything to lose.

This leads to the moral crux of the scandal – it is easy to laugh at the gullibility of the people willing to pay thousands for a glamorous beach party. However, Fyre shows that there are real people paying the price for Billy McFarland’s actions. From employees facing court action to overworked but unpaid Bahamians, this gripping documentary emphasises the ramifications of his actions. It also highlights the tragedy that they may never be compensated for their efforts.