The 80s were a good decade for Roger Corman; for that splendiferous decade he’s got 66 producer credits on IMDb.com. When I hear Corman’s name, I usually go “yay!” out of my sheer joy for pop culture unpolluted by elitist notions, but there also remains at the back of my mind a constant reservation: the fear – no, the knowledge! – that most of his movies are actually quite bad. 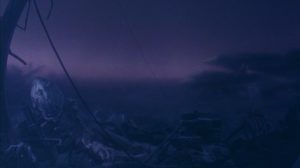 Corman produced lots of not-terribly-memorable sci-fi movies in the 80s (not to mention every other decade since the 50s), and Galaxy of Terror is certainly one of them. Until close to the end, it would be too generous to say that the movie has a plot. An outpost on an alien planet has been wiped out by mysterious creatures, and the “story” essentially concerns a rescue party who looks for survivors and creatures, and are also wiped out. Most of it is incredibly dull, unless you are a really big fan of trashy horror, occasional gore and stop-motion animation. 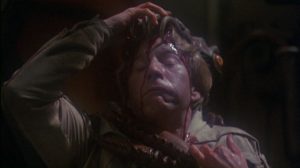 The actors are not given much to work with. They persevere admirably, but the only character I was remotely fascinated by was Grace Zabriskie’s shell-shocked pilot, Captain Trantor, who piloted the spaceship pretty much like a hotrod.

The frame to the story concerns a guy called the Master, who apparently rules the planet our crew comes from. Only in the last three minutes of the movie are we given some clue to what is going on with him and the semblance of a plot. 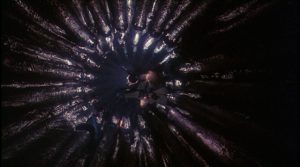 It is relatively obvious relatively early on, however, that the characters are not fighting real monsters, but their own fear-driven hallucinations. So, this movie turns out to be yet another entry in the “monsters of the id” genre, which started with Forbidden Planet (1956), continued in Journey to the Seventh Planet (1962), Solaris (1972 and 2002), Sphere (1998) and undoubtedly others – it can be a great plot if handled well, but Galaxy of Terror does not handle it well, and I found it very tiresome. Definitely not one of Corman’s greatest.

Still, the production values weren’t all that awful. Some of the production design was handled by none other than James Cameron, and it shows in several scenes that look much like in Aliens. At one point there is a pyramid which Cameron may have reused as the prop for the atmospheric generators in Aliens. And one of the corridors is also very familiar-looking. 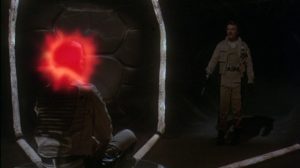 Another detail I will give Galaxy of Terror credit for is the names of the characters. They don’t just have generic American (Irish, Italian) names (which is a bit of a pet peeve with me); the characters are called things like Cabren, Alluma, Kore, Dameia, Quuhod and Mitri. Too bad this level of imagination didn’t extend to the story as well, but I guess we can’t have everything. Nor much of anything, frankly.