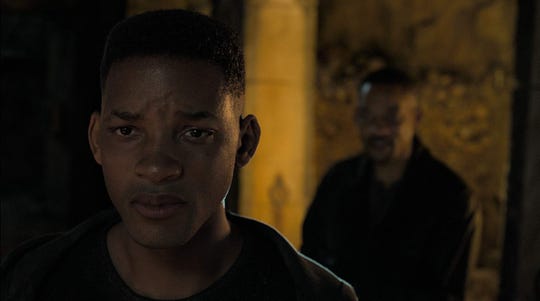 When last seen on the big screen this year the omnipresent Will Smith was a decorative bright blue genie granting whimsical wishes in the live action edition of Disney’s treasured Aladdin. In director Ang Lee’s suspenseful sci-fi thriller Gemini Man, Smith plays a conflicted government assassin who is in the gray clouds of jeopardy trying to avoid termination from a unique sinister force–a younger, dangerous clone of himself. Gemini Man looks to try and examine the inner soul of turmoil wrapped in the techno-taste of compelling visual optics. Unfortunately, the advanced computer-generated tactics involved cannot save this wooden wonderment of a science fiction/fantasy caper from its sluggish presentation.

The Oscar-winning Lee, credited with his fair share of memorable movies that range from the introspective Brokeback Mountain to the Life of Pi and beyond, concocts a meaningful but misguided exploration of identification duality in Gemini Man that just does not seem cohesive for its commentary on fighting the demons within. Lee, working with screenwriters David Benioff, Darren Lemke and Billy Ray, have the effective tools in tapping proven box office commodity Smith into on-screen service as the former rapper-turned-Oscar-nominated actor has dabbled in science fiction film projects previously. Plus, the premise seems quite compelling in theory although stillborn in execution. A meandering plot, drab script, forced action sequences, over-indulgent special effects that overwhelm the incoherent story–all are a conglomeration of dullness. It certainly helps that Gemini Man is visually impressive but this does not compensate for an otherwise uneven narrative.

Henry Brogan (Smith) is a top-notch shooter for the Defense Intelligence Agency. He is labeled a bona fide governmental operative whose marksman skills are undeniably superior. But Brogan becomes rather disillusioned as he feels that his talent for pulling the trigger is gradually slipping away. Although feeling self-conscious about his diminishing shooting skills, Brogan’s self-doubt has him leaning toward giving up his sniper profession but this does not sit too well with the top brass at the DIA. They beg to differ with Brogan’s questionable stance regarding his unpredictable trigger finger.

The DIA decides to utilize Danny Zarkarewski (Mary Elizabeth Winstead) to keep a close watch on the fickle Brogan. Of course, Brogan detects Danny’s tracking efforts and she is soon compromised and pulled into the deadly radar as she is targeted with Henry. Thus, the endangered pair head to Columbia to hide away and stay low-key. The reasoning may be out of sight, out of mind but the the tandem’s plan does not exactly work as planned. Time to push the panic button.

Interestingly, the notorious chaser hunting and hounding Brogan is remarkably a clone of his likeness known as Junior. Junior (and many inventions like him) were cloned by the insidious Clar Verris whose agenda is to create a massive army of Henry Brogan-inspired clones so that going to war will spare the lives of actual human sacrifices. What better way to achieve the best of both worlds: clone the qualities of a talented assassin and ease the agony of the human pawns that become casualties of such wars. Huh?

Gemini Man feels as if it is all over the map in terms of its shaky motivation. The film’s contradictory make-up is quite puzzling as it is almost at a battle with its own identity much like Smith’s bewildered character. Does the film want to be regarded as an innovative, action-packed science fiction piece with splashy special effects-driven flourishes? Or does it want to be considered an experimental, character-driven psychological melodrama? Even Owens’s villainous cloner Verris is not the typical baddie out to destroy the world particularly when his cloning methods and rationale are actually more considerate than corrosive.

Overall, Gemini Man is a monumental misstep for both Lee and Smith. Both helmer and performer have dipped their toes in the arena of melodramas and sci-fi ditties with hit-or-miss results. Lee’s plodding direction and Smith’s flat performance as the double-trouble lead does not give much spark or spirit to the ambitious message embedded within the story’s structured sentiments. The draggy dialogue and pedestrian by-the-dots tension does the problematic Gemini Man no favors at all. The messaging about the state of fragile humanity is understood but not so much in a fragile sci-fi fantasy that dances around in indecisiveness.