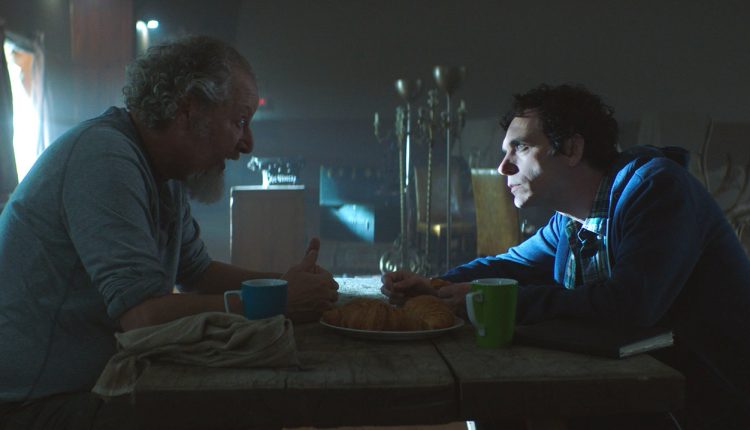 Scientist James is obsessed with solving the mystery to unlocking time travel. However the only one standing in his way is himself… literally… in James Vs His Future Self.

“There is not fate but what we make for ourselves”.

It is of the most famous lines from another time travel movie, The Terminator. Yet it rings true for this romantic time travel dramedy written by Jonas Chernick and Jeremy LaLonde.

When James (Chernick) finds himself confronted by his older, future self (played by Daniel Stern), he is faced with an impossible dilemma. Walk away from his life’s work which he now knows he can achieve in order to be a happier, better person or be doomed to repeat his past/future mistakes.

Christopher Booker wrote about how there are essentially only seven plots in the whole of fiction and one of them is Rebirth. Where an event forces the character to change and become a better person e.g. A Christmas Carol, Groundhog Day, etc. This is what happens to James. Albeit, the event is not the Ghost Of Christmas Future but His Future Self.

One of the film’s key strengths is the central relationship between James and, er, James. Jonas Chernick is suitably off-beat, good-natured but self-absorbed at the beginning of the film. When Daniel Stern’s bitter, resentful but soulful older James appears, the two spark off each other nicely. Despite lacking a compelling physical resemblance (young James notes he is shorter than old James), the two create a bond that allows the audience to believe that they will become one another. It helps that they also share great chemistry with their (joint) love interest, Courtney (Cleopatra Coleman).

From a logistical perspective it draws more inspiration from Primer & Looper than Back To The Future. Now before one starts shouting about messing with space-time continuum or worrying about paradoxes, this is not that kind of time travel movie. It is as concerned with changing one’s self as it is with changing the future.

That being said, writer-director LaLonde and lead actor/co-writer Chernick are clearly fans of the genre and have done their research and due diligence. As treating it as science fiction rather than fantasy, it all seems plausible and logical. Devoid of the normal plot holes so large you could drive a DeLorean through.

It is warm, funny and full of heart. It may even cause you to take a long hard look at yourself and decide what you really want.

James Vs His Future Self is ultimately more like another time travel quote. This time from Doc Brown. “Your future isn’t written yet, so make it a good one”. Well LaLonde and Chernick have made a good movie and their filmmaking future is certainly bright.

James Vs His Future Self is available to screen on Sky Movies from April 7.