Another week, another ridiculously high-concept movie from the bargain basement studios who seem to churn out creature feature after creature feature simply to fill up the schedule for The SyFy Channel. The fact that Ghost Shark is surprisingly enjoyable from start to finish is either a sign that a) it’s better than most or b) I’ve watched too many of these movies and need to go for a lie down in a dark room. Perhaps it’s a mix of the two. 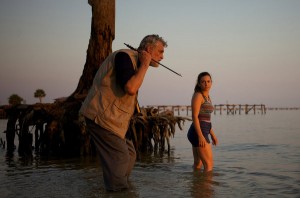 Like so many other titles to be released in recent years, I’m thinking of 2-Headed Shark Attack and Sharknado, this movie has a plot summed up by the title. It is about a ghost shark. That’s all there is to it. How does this ghost shark attack? Well, it still moves through water but it can use any bit of water available. So prepare to be thrilled as a ghost shark attacks some teens in a swimming pool, attacks some kids using a water slide, causes carnage at a carwash and, best of all, gets to a victim via a water cooler. 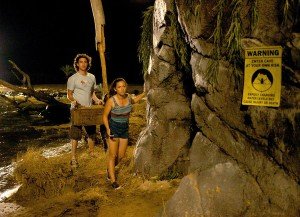 Writer Paul A. Birkett doesn’t really seem to lace the script with nods and winks to the audience, but he certainly seems to know how absurd the whole thing is and decides to overcome that potential hurdle with a number of small set-pieces that raise a smile thanks to the bare-faced cheek of each occurrence.

Director Griff Furst doesn’t have to do much to keep things ticking along nicely, but he certainly helps by making sure that one or two of the special effects are decent (they’re still far removed from the top tier blockbuster effects, but they’re not bad for this level of moviemaking) and even putting a couple of good gore gags onscreen. 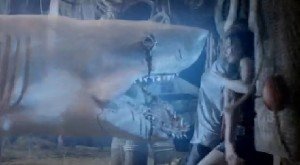 The acting from everyone involved is, to put it politely, as you’d expect. Richard Moll is probably the most recognisable name on the cast list (although Shawn C. Phillips has now popped up in enough of these movies to count as a minor celebrity) and he’s stuck with the role of the old-timer who may be a bit mad or may just hold the secret to dealing with the ghost shark. Mackenzie Rosman, Dave Randolph-Mayhem Davis, Jayme Bohn, Jaren Mitchell, Thomas Francis Murphy and Lucky Johnson are all adequate. 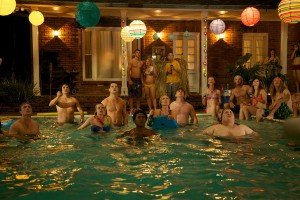 But this isn’t about great acting. Or great direction. Or even a great script. This is about a ghost shark.

Ghost Shark materialises on DVD here in the UK on 28th October.