Santiago, Chile, present day: Gloria (Paulina García), a fifty-something woman who’s been divorced some years, likes to go dancing. She meets Rodolfo (Sergio Hernández), a man perhaps her own age, recently divorced, who’s very interested. A relationship follows. Then things run into trouble when he seems not as free of his former marriage. The ex-wife and two grown daughters do not work, and live off him. And he seems unable to pull free of their cloying dependency. His neuroticism extends to connecting with families. He hides his relationship with Gloria from his daughters, and when invited to Gloria’s son’s birthday party to meet her ex-husband and his new partner, he is so overwhelmed by their normalcy, he flees unannounced. Gloria breaks off with Rodolfo, but at his continual pleading, resumes it. But trouble looms again. Eventually Gloria triumphs over this failure, as symbolised in a final sequence where she dances and sings Umberto Tozzi’s “Gloria”, famous as a disco song recorded by Laura Braunigan. 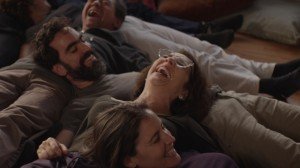 The film follows a simple trajectory, with a few key sequences. First is the meeting of Gloria and Rodolfo. A scene at Rodolfo’s outdoor game concession featuring paint guns. Then the birthday party at Gloria’s son’s place. Then a trip to a resort when Rodolfo fails Gloria again. A semi-comic motif of Gloria at home features her annoying, noisy, perhaps suicidal neighbor upstairs, whose hairless cat keeps sneaking into Gloria’s flat. 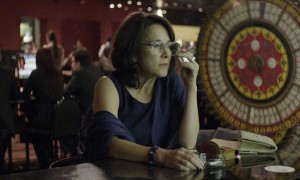 Gloria’s revenge against Rodolfo may have too much a facile feel-good quality. However, this becomes a study in resilience in which a person, and a divorced woman, not probably Latin America’s most advantaged, comes to define her strengths by being forced after trying to ignore the warning signs (twice) to see how another human being is unworthy of her. 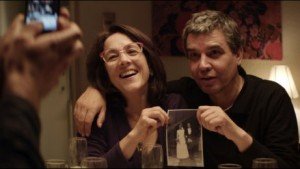 Paulina García won the Best Actress award at Berlin, and this is indeed a rounded, fearless performance in an unusually rich character study, even if the film is uncomplicated. 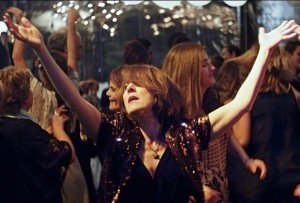 Gloria, 110 mins., debuted at Berlin Feb. 2013, shown at numerous other international festivals, including the New York Film Festival (Oct. 2013), where it was screened for this review.