Independent dramatic comedies have always had a tendency to try a little too much. It’s a sub-genre that’s hard to master, yet countless numbers of them are produced, year after year. The indie comedy drama requires a finely tuned formula. It needs the correct amount of drama, character development and emotion, while also making it a humorous, pleasant and enjoyable experience. I’d like to say this is the case with Goats, but it simply doesn’t have the coherency to make it a relaxing piece of cinema that you can lose yourself in.

Ellis Whitman (Graham Philips) is a somewhat unconventional teenager. Brought up in a broken home he lives with his selfish spiritualistic mother Wendy (Vera Farmiga). Wendy forbids Ellis from seeing his father, causing Ellis to look up to Goat Man (David Duchovny) as his only real role model. The time comes for Ellis to leave home for the prestigious Gates Academy, as Wendy and Goat Man try to adjust to life without him. The change of scenery and lifestyle causes Ellis to reflect on his life.

The immediate problem with Goats as I stated previously, is that far too much goes on. In the relatively small time-frame of 1:30 there are numerous sub-plots, needless characters and a serious lack of focus. The storyline tries to follow Ellis in a coming of age style ballad, the problem with this is, there’s an unnecessary amount of time spent watching life at home. The stretch between the two stories causes the sequence of events to be a mess, which ultimately results in no real solution or development. The concept and zany host of characters was initially interesting, but by the end of the film, the inevitable question comes to mind of what actually happened?

Goats isn’t a ‘bad’ film, the potential is there, but the pieces of the puzzle don’t mesh. Graham Philips is decent as the stereotypical confused teen, most of the other performances were forgettable. A majority of the supporting character  suffer from a severe lack of character development, not to mention the dialogue is prone to relapse often negating any real change we been to see. David Duchovny as the mysterious pothead gardener is an enjoyable spectacle, but ultimately a pointless one. Goat Man is an ensemble character that seems to have no real purpose. One could guess the role was emphasised after David Duchovny came on board. 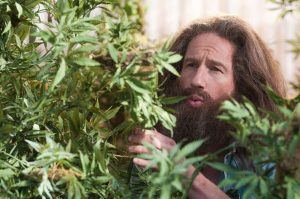 Overall, Goats caught my attention but dropped the ball fairly soon. Christopher Neil’s direction doesn’t seem to be at fault, the scenes felt fairly well composed. An educated guess would imply the script is a messy adaptation of Mark Poirier’s novel, possibly an explanation as to why so many events are crammed into a small runtime. It seems like the scriptwriter simply didn’t want to cut significant events from the novel, even when necessary.

Goats was ultimately disappointing, but perhaps still worth a watch for David Duchovny enthusiasts.