An action comedy with a dollop of the supernatural added to it, The Golden Child is a film that’s hard to dislike, if you’re an Eddie Murphy fan. It is, however, one of his earliest films to already show signs of what would become his undoing. The opening credits show that this was made in association with Eddie Murphy Productions. The cheeky, trademark, Murphy laugh is overused within the first 10 minutes of the movie. And, worst of all, everything just feels a bit lazy, with the leading man already seeming to have lost some of his sharpness (thankfully, that wasn’t a permanent affliction).

Murphy plays Chandler Jarrell, a man who finds missing children. Or tries to, at least. He is approached by Kee Nang (Charlotte Lewis) to help find a child who has been kidnapped, a child who is prophesied to save humanity from itself. Unfortunately, the nasty Sardo Numspa (Charles Dance) doesn’t want humanity saved. He will do everything he can to make the golden child vulnerable and then kill him. Jarrell is, apparently, the chosen one, but he’s only going to be useful if he comes to believe Kee Nang and realises what he must go through to save the child.

Directed by Michael Ritchie and written by Dennis Feldman, The Golden Child is consistently amusing and certainly a solid star vehicle for Murphy to coast through. The whole thing is adequately put together, the soundtrack is typical ’80s synth work and there’s even time for a little flight of fancy involving a little dancing man made from a Pepsi can. So much of the movie is just fine for what it is, and when it was released, but other aspects don’t feel right. There’s a dream sequence that, while fairly amusing, just feels a bit too much like padding. The action is never that exciting, with the grand finale even feeling a bit flat and dull (despite some enjoyable stop motion work). And, worst of all, the story lurches from one sequence to the next with a strange, fast and loose, approach that doesn’t benefit the material one bit. 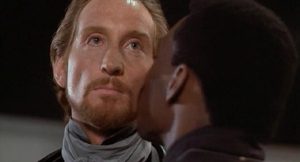 Murphy is fun, Lewis is fine, Dance is the best thing in every scene that has him, and there’s some good fun to be had with the supporting turns from Victor Wong, James Hong and Randall ‘Tex’ Cobb.

Despite its flaws, this remains an enjoyable way to waste an hour and a half. In fact, considering the stinkers that would crop up over the next few decades in his filmography, it stands as one of Murphy’s better movies (although it’s far behind the heady delights of Trading Places and 48 Hrs).