by Stephen Mayne
in Film Review

Military Language has long been a battleground. In a calculated attempt to sanitise the image of death and reduce culpability, euphemisms are employed aggressively. In the world of drone warfare, a successful strike is denoted by the simple phrase good kill. Andrew Niccol’s intelligent drama suggests there is every reason to think it’s anything but good. Niccol struggles to merge his characters into the wider moral issues under examination, but Good Kill still delivers a thought-provoking and much needed look at America’s new favourite military practice.

Ethan Hawke, collaborating with Niccol for the third time after Gattaca and Lord of War, plays Major Thomas Egan. He used to fly real planes but now he’s stationed in a small portable container in Las Vegas operating drones over Afghanistan. He’s the best Lt. Colonel Jack Johns (Bruce Greenwood) has but his desperation for a return to the sky, and unease over the dubious operations they are sent on by the CIA, push him ever deeper into drink and ever further away from his wife Molly (January Jones) and their two children.

The best moments in Good Kill are spent hovering high above the ground. There’s something fascinatingly gruesome about watching the grainy cameras track potential Taliban fighters. When they do decide to fire, there’s a delay of several seconds before the missile hits. In that space time seems to stop. Everyone sits with baited breath, sounds recede. Normally it goes without a hitch. Sometimes civilians wander in at the last moment. Following the explosion, they are forced into the grisly task of counting bodies. 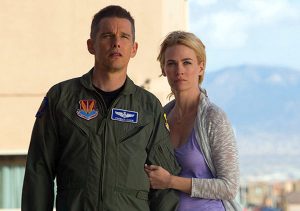 Early on, Egan is given a new colleague to fly with, Airman Vera Suarez (Zoë Kravitz). She lacks his frontline experience but not his growing disillusionment. Niccol uses Suarez as the film’s moral heart. It’s always from her lips that doubts are voiced. These increase exponentially when their team is seconded to the CIA to fly missions that cross over just about every line imaginable.  When questioned though, the answer is always the same. The orders come from the top.

Niccol fares less well trying to build in the human element. Kravitz raises interesting ideas but she’s really just a political mouthpiece. Hawke, in quietly grizzled mode, is magnetic, yet his breakdown feels forced. It doesn’t help that Jones is given nothing to do as the bored housewife. It’s unfair to accuse them of lacking chemistry as they are never given the chance to build any in the first place.

There’s also a step back from the bleak nature of their work that jars the ending. Egan has been forced to surveil a compound for hundreds of hours. While doing so, he witnesses a man regularly raping the compound cleaner. Mired in guilt and feelings of cowardice for no longer being on the front line, Egan gets a final moral victory that distracts from the core of the film. This distraction doesn’t prove fatal though. Good Kill tackles a complex issue, and, like Egan, it hits the target.