Back in the early and mid-80s my provincial grade school offered its pupils membership of a great film club, where us kids could see all the latest, greatest movies at the local theatre house. That’s where I saw, at an impressionable young age, all sorts of sci-fi, fantasy and other movies, from Raiders of the Lost Ark, The Cannonball Run, E.T. and WarGames to, you guessed it, The Goonies. Although I didn’t like it as much as some of the other classics from that time, I still remember having a great time watching it. And although I always intended to revisit it, I never actually did see it again until just now. 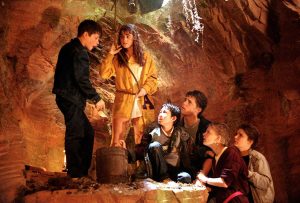 Does it hold up as a cool and adventurous yarn for kids in that special all-ages style that the 1980s did so well? It sure does. The first thing that registers when you watch The Goonies is that they just don’t make kids’ movies like this anymore. Maybe it was a holdover from the more political 1970s, but lots of 80s movies are populated by highly identifiable lower middle-class ordinary people whose lives are filled with believable problems, both personal and in relation to social and corporate pressures. At the same time, esp. in Spielberg-driven fare like this, there was a strong emphasis on character, sometimes but not always crossing over into exaggerated sentimentality, but usually working out well. J.J. Abrams attempted to recapture this E.T.-like style with Super 8 (2011), but that didn’t work for me at all, neither in terms of story nor character, partly because the setting didn’t seem credibly lived-in, but mainly because the narrative pay-off never came. The only kids’ movie in recent years that I feel really captures the wonder and sci-fi excitement of the powerful 80s is Real Steel (also 2011), although that one missed, in my opinion, an opportunity for a better ending.

Back to The Goonies, though. The story centres on a small town called Astoria, and some families living in the Goon Docks part of town, hence calling themselves “the Goonies”. Parts of this community are slated for demolition, because filthy rich people want to turn the place into golf courses. The Goonies about to be evicted unless they can quickly come up with a whole lot of money. Fortunately, some kids find a pirate treasure map in the attic, and discover that there are secret pathways in the hills and caves surrounding the town. Will they go through unspeakable peril (including taking on an evil old “Ma Baker” type woman and her dangerous sons) and find the pirate treasure amid booby-trapped cave tunnels to save their community? Well, what do you think? 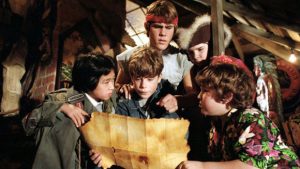 There are a lot of scenes and themes inspired by the Indiana Jones movies – Spielberg knew a good thing when he saw it (or in this case, made it). But perhaps the most memorable scene is when the fat kid, Chunk, confesses all the sins of his life to the nasty criminals, who have instructed him to tell them everything. He tells them that he once went to a movie, sat on the balcony, and made retching sounds while pouring casserole on the patrons below. This scene has stayed with me through the years, because back in the heady days of the grade school film club, I always considered the front balcony row the best seat in the theatre, and always scrambled to secure it. I never did pretend to puke on the people below – but I was sorely tempted!