I’m not sure what Wes Anderson has planned after this movie, but I’ll say this. It’s hard to imagine him making a more Wes Anderson movie than this one. If you don’t like Anderson’s style and aesthetic then steer well clear of this movie. It practically oozes Anderson from every frame. Which is a disgusting thought, really. Sorry, I should have thought a bit more before typing that sentence.

While it’s set, unsurprisingly, in the titular hotel, this is a film that’s actually about an employee of the hotel. A man named M. Gustave (Ralph Fiennes), his manners, and the bizarre period in his life that saw him forge an unbreakable bond with a very young lobby boy named Zero (Tony Revolori). The tale is told by the older Zero (F. Murray Abraham) to a writer (Jude Law). The writer waits a number of years, until he is older (in the form of Tom Wilkinson), and then relates the telling of the tale to the audience. The story involves sex, death, love, delicious sweet goods, and impeccably good manners.

Part of my mind seemed to want to hate this movie. For most of the runtime, there was a small voice protesting while the rest of my mind enjoyed the visual confection on the screen. It was so unrelentingly . . . . . . . . . Anderson that it couldn’t possibly satisfy as a movie experience. Or so I thought. I was wrong. This may not be up there with his previous works, but The Grand Budapest Hotel is a movie chock full of many small delights. Every scene may be a tableaux, but that’s no reason to complain when the details are as lovingly applied as they are here.

The script may not be as carefully crafted as the visuals, but it’s good enough for the cast to work with, and this cast is pretty much perfect from start to finish. 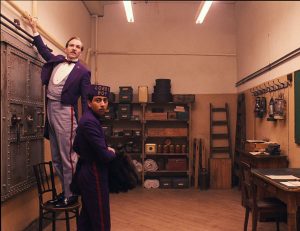 Fiennes is the undisputed star of the show, channelling a mix of Leonard Rossiter and any top-notch movie butler you can think of. He’s a hilarious mix of poise, good manners and occasional explosions of profanity. Tony Revolori, who shares most of his scenes, is a fine foil, maintaining a deadpan expression throughout as he learns all he can from his respected elder. Adrien Brody is very funny, Willem Dafoe is quite disturbing, Jeff Goldblum is his usual Goldblum-ness, Edward Norton is enjoyable in his role, and Saoirse Ronan is just absolutely adorable, playing the girl who steals Zero’s heart. Abraham and Law don’t have too much screentime, but both are very good, and the ensemble is fleshed out further by names such as Bill Murray, Tilda Swinton, Mathieu Amalric, Harvey Keitel, Jason Schwartzman, Lea Seydoux and more.

It’s that cast, with everyone on fine form, that carries this piece of work over some uneven terrain to a finale that proves surprisingly moving. Perhaps I should give the script a bit more credit. It’s not packed with as many of the witticisms to be found in the likes of The Royal Tenenbaums or The Life Aquatic With Steve Zissou, but there’s a strand or two weaving through the film that Anderson manages to pull tight at the very end, bringing everything together nicely without it ever feeling forced or undeserved. This is a movie that you don’t think will really deliver any kind of finale, and then it does. And it turns out to be great.

If you dislike Anderson’s work, or even if you’re just ambivalent about it, then avoid The Grand Budapest Hotel. It’s not for you. Anyone who loves his body of work will like this, at the very least, and I’m sure that many will love it. I may have been battling with a small mental rebellion for much of the runtime (what’s new there?), but I was still smiling as the end credits rolled.