“The movie is a masterpiece, a grand swooning epic, lush to the point of insanity, Fellini turned up to 11,” says The Guardian’s Catherine Shoard of Sorrentino’s triumphant new collaboration with the great Toni Servillo, La grande bellezza, perhaps the best, certainly the grandest, thing Sorrentino has done and the best thing he and Servillo have done together. 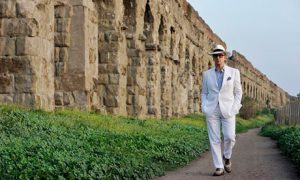 Warning: it’s long (142 minutes) and you may be bored, or feel overfed. “Lush to the point of insanity” means the images and scenes are over-rich, their ancient Roman gilded gorgeousness mitigated only by the dry urbanity of Jep Gambardella, Servillo’s character and the film’s urbane protagonist. Jep is originally from Naples, like the director himself (and slips in and out of a Neopolitan accent), but has lived in Rome long enough to know everyone in its society worth knowing. He’s a well-known but lazy and snobbish journalist who once, forty years ago, wrote a novella that was much admired and is still sometimes remembered. Why has he done nothing like that since? Ah, yes: good question. 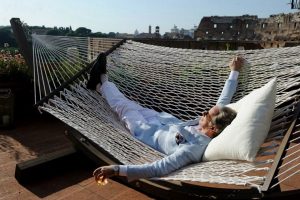 Most of Jep’s energy seems to go into dressing impeccably — the pleasure of observing his succession of elegantly casual, impeccably tailored jackets and suits and ties and shoes is itself worth the price of admission — and partying till the wee hours every night with tough, middle-aged, a bit too tan, perfectly botoxed models of mondanità,” society life, of which Jep himself long ago decided to be a prime exemplar. Jep is a modern Marcello Mastroianni and this is a stylised, technicolor La Dolce Vita. But this is not what Pauline Kael called the “sick soul of Europe.” Rather it’s Italy, as they like to say now, “in a very difficult period of transition.” In other words, in a prolonged state of spiritual, moral, and aesthetic exhaustion of which Berlusconi (not mentioned here–this isn’t a Nanni Moretti film) may be highly symbolic. It’s a country stifled by its cultural history, with so much beauty, it lacks the energy to make anything new any more. 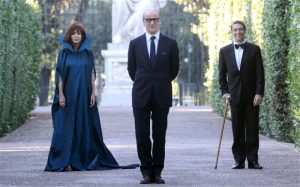 And so, exemplifying the state of Italian affairs — and Sorrentino has taken on no lesser task, though this is far too beautiful, witty, and inventive a film to editorialise or document — this movie can’t really, and doesn’t, go anywhere. But it’s a very lovely, cinematically splendid and surprisingly graceful and pleasurable ride. I watched it with a smile on my face, because a beautifully made film makes me happy.

There is no spiritual crisis, as in Fellini’s classic, and Sorrentino does wide panning shots but not long rambling takes. He does a succession of short scenes with Jep in all those outfits and at all those parties. The opening one is a carnivalesque disco celebration of his sixty-fifth birthday. There are various moments, including a magician at the Colosseum who makes a giraffe disappear and a 104-year-old Mother Teresa-surrogate at a dinner party. But the decisive one for Jep is when he’s informed that an old girlfriend he’s been in touch with for decades but who married another man has died. Flashbacks to that early love may suggest why Jep has lost himself in lazy urbane pleasures and never really “done” anything. 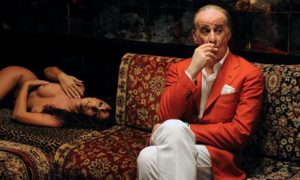 But it’s also suggested that Jep’s pleasurable otium (and Jep’s urbane smiles are another of the film’s distinctive, memorable pleasures) is in the nature of the city of Rome itself. The city is too culturally rich and beautiful and lazy to allow its inhabitants the space to do anything. (Factually, remember Turin and Milan are where Italian industry and fashion happen, and Rome’s Cinecittà doesn’t seem to be a mine of energetic accomplishment these days.) 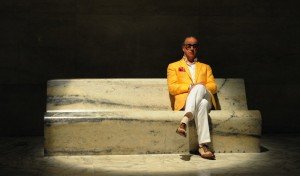 There is much else one could describe, including Jep’s best friend, the explicitly named Romano (Carlo Verdone, by trade a comedian, and a quintessentially Roman one), who’s an aspiring playwright; and the literary references to Proust, Céline, Dostoyevsky, and Sartre — partly mocking the self-importance of the Fellini-esque model. But one can’t encompass this cornucopia of scenes and celebrations in a review. All one can say is, if you love lush and impeccably stylish cinematic excess, and have the patience, and if you wish to be up on the latest and best in Italian filmmaking, you should see La grande bellezza at your earliest convenience in a cinema with a nice big screen. It is a great beauty of a film, right down to the last slow gliding moments of the end credits.

La grande bellezza debuted in competition at Cannes May 2013 (and was nominated for the Palme d’Or). It was released on DVD and Blu-ray 13th January 2014