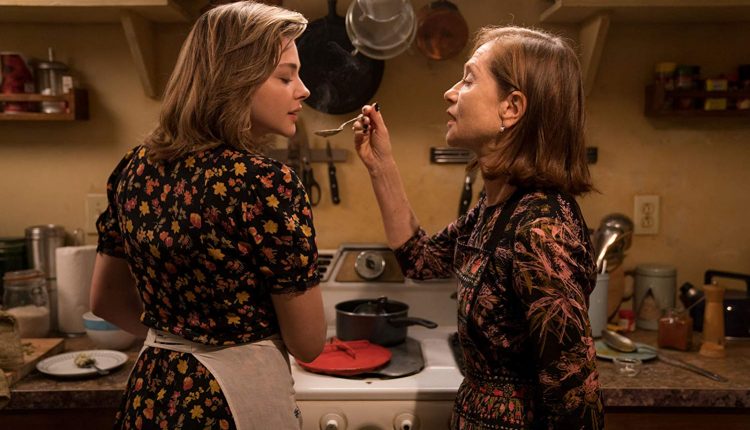 The Crying Game, Breakfast on Pluto, The Butcher Boy, Michael Collins – some of Neil Jordan’s best work, a director known for his focus on unconventional relationships and the Troubles, with a deft hand for shock twists. His newest, Greta, is a significant departure from his usual work – a genre film set in New York (by way of filming in Ireland and Canada) that is more schlock than shock, centring on an increasingly tense game of cat and mouse between Greta (Isabelle Huppert) and Frances (Chloë Grace Moretz).

We start with a handbag on a subway that wide-eyed innocent Frances stumbles upon. Frances is ‘not like other girls’, a theme emphasised ad nauseam by best friend and roommate Erica (Maika Monroe from It Follows) which is why she, unlike apparently every other New Yorker, deigns to return the handbag to its owner – the isolated and widowed Greta. From there, a friendship blossoms; Frances confesses her acute and ever-present pain at losing her mother the year before, Erica comforts and bolsters here while sharing her own feelings of loneliness, now that her family are either dead or far away. In an era where young people making friends with older people seems to pluck the internet’s collective heartstrings, the opening of the film can seem almost idyllic – Greta and Frances go to the park! Frances shows Greta how to use her phone! They even adopt a dog!

But the tone quickly changes as Greta’s behaviour becomes increasingly erratic and obsessive. And as the obsession grows, the film’s strengths and weaknesses become more readily apparent. There is nothing in Greta to take seriously – no twists to speak of, nothing that happens truly thrilling (a bit of an upset if you’re going to see a thriller). That being said, Chloë Grace Moretz and Maika Monroe give pitch perfect performances as young adults living in New York, and lean into the fear and trauma of Greta’s behaviour. Moretz in particular gives a lot of heart to Frances’s character, and you believe every second of her empathy for Greta and subsequent terrorizing. If this were a down to the bone thriller, you get the sense that Moretz’s performance would hold up well.

Outside of Moretz’s performance, Greta’s other strength is her co-star Isabelle Huppert. She is explosive and frenetic, and did double duty in inspiring massive laughs and shrieks from the audience, sometimes in the same scene. For those used to some of Isabelle Huppert’s more popular restrained and stoic performances, it is a surprise and a delight to see her so animated, large and unhinged. While Greta might not have a memorable plot, or any real sense of fear or consequence, it has one of the greatest assets of all – camp. Extraordinary, over-the-top, chewing the scenery camp which elevates it from its fairly derivative premise.

With the thriller premise, the heavyweight acting chops of Isabelle Huppert and Chloë Grace Moretz, and Neil Jordan at the helm, Greta had a lot of promise to be a complex look at intergenerational friendships and the horror of the mother (be it real or substituted) with a refreshingly female-heavy cast. While the last part is indisputably true, Greta is certainly not complex, nor thrilling, nor surprising – but what it is is enormous fun. For those looking for something to add to the great thriller canon, look away, but for those looking to jump, laugh (a lot), and delight at a film, Greta is for you.