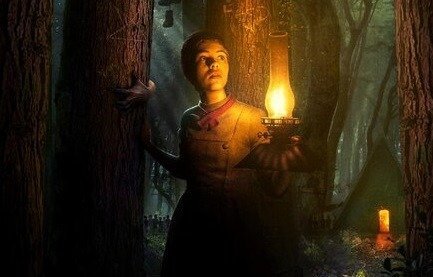 The classic German fairy tale Hansel and Gretel remains one of the iconic chilly-minded childhood fables from the artistic confines of the Brothers Grimm. Imaginative, eerie and oddly lyrical, this well-known story about close knit siblings venturing into the dark wooded wilderness has enthralled generations of youngsters and oldsters alike willing to let their imaginations drift ever so aimlessly.

The countryside creepfest Gretel & Hansel is the latest cinematic take on the aforementioned Brothers Grimm account of the related mischievous youths exploring the realms of surreal curiosity and chaos. Filmmaker Osgood “Oz” Perkins (“The Blackcoat’s Daughter (February)”) offers his choppy atmospheric spin on the tandem’s spooky saga in a visually arresting but tepid tailspin into an underdeveloped horror/mystery spectacle that feels mechanically drenched in its drab suspense mode. Perkins and screenwriter Rob Hayes serve up a rather stylish Sci-Fi fantasy but the impressive optics cannot overcome the supernatural sludge that methodically lingers in the clunky Gretel & Hansel. Indeed, Perkins is no stranger when it comes to parlaying off-kilter sideshows of the bizarre. Unfortunately, Gretel & Hansel only presents itself as tedious trickery grasping at whiffs of delayed scares that are slight at best.

The plot is understandably self-explanatory: 16-year old Gretel (Sophia Lillis, “Uncle Frank”, “It Chapter Two”) decides to make a decision by taking her younger brother Hansel (Samuel Leakey) into the dense woods in search of food and work. Their hungry stomachs lead them to a house emanating with the promising odors of tasty food. The occupant of the dwelling loaded with delicious eatables belongs to a mysterious older woman named Holda (Alice Krige, “A Christmas Prince”). Holda welcomes the tykes with open arms. Unaware of the sinister dealings in the haunted household this whole frightening experience will render Gretel and Hansel as exposed targets at the dastardly hands of the unsuspecting and wicked Holda.

The only thing guaranteed that is the selling point to Gretel & Hansel is the familiar theme of endangered youngsters at the misguided hands of ghoulish grown-ups. Plus, the omnipresent concept of hedonistic homes and the corrosive occurrences that develop in arbitrary fashion under the roof is a given dilemma. The main problem is that Perkins’s pedestrian direction and Hayes’s uneventful script fails to elevate this fairytale goosebump beyond its lackluster, mundane moments. The limping visceral shocks and stillborn intensity handcuffs whatever leftover horror-induced tension that Perkins had in mind for this perfunctory potboiler. There are a few flashes of decent takeaways in Gretel & Hansel–particularly the campy performance by Krige’s calculating hag Holda and the eye-opening production that registers with certain opulence. Otherwise, the psychological edginess is strangely dismissive and comes off as disjointed within this moody farce.

As the imperiled sister-brother duo, Lillis and Leakey play it safe–or at least the restrictive material never allows them to go beyond the routine follow-the-dots exploits of their so-called traumatic travels. Their participation is deemed wooden…from Gretel’s stiff voice-over narration to the uninspired rickety trappings of Holda’s unpredictable shelter. One wants to embrace the weirdness of Gretel & Hansel but the deprived story lacks any notable punch to ensure authentic creepiness.

Evidently, Gretel and Hansel are not the only ones that are led astray among the whispery woods in this uninvolving fractured fairy tale.