Alec Newman stars as a blind veteran, Mal, in this interesting, tense drama that shows just what can be done with a simple premise and one or two memorable characters.

When I first heard about Greyhawk I also heard that it had a bit of a Harry Brown vibe to it. While that’s somewhat fair, in a way, it’s also grossly unfair. This is not gritty revenge movie. The social setting may be similar, and the courage of the central figure, but that’s about where the similarities end. Please bear that in mind when you see the movie, otherwise you may end up disappointed. And that won’t be the fault of the film.

Mal has a lot of anger. You can’t blame him. He served his country, lost his eyesight, and ended up stuck in a council estate that he doesn’t like. That’s okay though, he’s getting to move soon. He’ll head off, just him and his guide dog (a lovely black labrador) in the countryside with nobody to bother them. Unfortunately, in the days leading up to his big move, Mal has his guide dog stolen. He thinks he knows who has done it – some kids in the Greyhawk estate – and he’s determined to get his dog back in time. Whether or not he can do it alone is a different matter. A young woman (Paula, played by Zoe Telford) offers to help him, but he doesn’t make it easy for her. 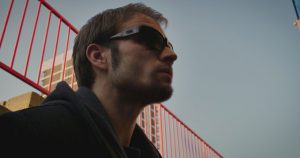 Written by Matt Pitt, Greyhawk is a look at how your life can be negatively affected by anger carried around, day after day. There ARE people out to cause trouble, and make things difficult, but that doesn’t mean that everyone has to be put in the same basket. Some folks do actually want to help. Despite the fact that other characters populate the script (with Jack Shepherd a standout as Howard, a man who means well but always seems to rub Mal up the wrong way), the dialogue between Mal and Paula provides the core of the film, with the latter being a real positive force, even as Mal continues to emanate negativity and anger during the search for his dog.

Director Guy Pitt keeps things simple. This isn’t a bright movie full of camera tricks and wizardry. It’s as grey and drab as the main environment, unsurprisingly, and the audio cues are heightened to keep viewers alongside Mal for every unsure step on his journey. Pitt relies on the strong central performances from those already mentioned (with Michael Fox also doing great work as a young lad who may or may not be of use to Mal in his quest), and he’s right to do so. Greyhawk really goes up a level during the moments that show characters getting to each other, antagonising one minute and reluctantly conceding that there may be a better approach the next.

Well worth your time, Greyhawk will prove ultimately unsatisfying for some. It takes a premise that sounds like a high-concept movie and then grounds it in the reality around us. But that’s what makes it a more interesting film.