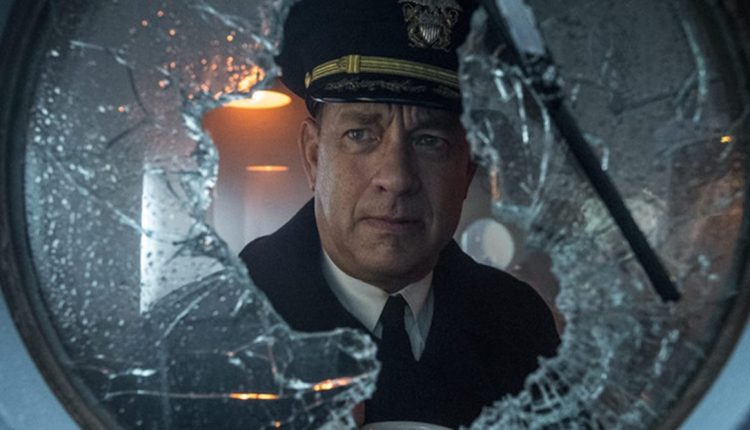 The new World War II drama, Greyhound, has made its debut on fledging streaming service, Apple TV+, consigned courtesy of COVID-19 to the small screen. Tom Hanks has expressed his disappointment that his passion project will not receive the theatrical release that it screams out for. He had worked on the movie for ten years, writing the screenplay, acting as producer as well as starring in it. Cinema’s loss is the gain of a new enterprise eager to enlist subscribers with enticing titles such as this.

Based partly on true events and the novel, The Good Shepherd by C.S. Forester, the film tells of Captain Ernest Krause of the US Navy (Hanks) who in 1942 leads an allied convoy across the Atlantic to Liverpool. The journey encompasses the notorious “Black Pit”, a section of the ocean where German U-boats skulk which does not benefit from aerial protection.

Although Hanks is ably supported by cast members, Stephen Graham (The Irishman) and Rob Morgan (Mudbound), it’s his presence which dominates the movie. Rarely off screen, he presents us not with a gung ho hero but rather a fundamentally decent man of faith torn by the moral dilemmas of war. After a U-boat is destroyed, a jubilant sailor exclaims: “50 less krauts.” Krause responds by saying: “50 less souls.” It’s a moving moment, sensitively played. With echoes of Jack Hawkins in the British maritime epic, The Cruel Sea, his is a performance which conveys angst with subtlety.

That little is known of its other characters works to the detriment of the film as it allows only for investment in Krause. This is a casualty of its lean running time of 93 minutes (inclusive of voluminous credits). Whilst its brevity is refreshing in an era of overinflated blockbusters, time spent in developing an insight into others of the crew would have garnered greater engagement and consequently a more heightened sense of tension.

This is compelling but not as gripping as it should be, lacking the visceral energy of Christopher Nolan’s Dunkirk or Sam Mendes’s 1917. Aaron Schneider (Get Low) delivers a solid tale with efficiency but little innovation. Impressions of the film are however hampered by the fact that it is not to be presented in the manner for which it was clearly designed. On TV it suffers not only from the reduction of its vistas of naval warfare. The claustrophobic scenes within the ship are not so intense when viewed in a sunlit lounge rather than a darkened auditorium.

Although at home it will be a less immersive experience than intended, in terms of expectations for a movie of this kind, Greyhound ticks all the boxes. It just never dares to stray outside them.