Remember a while ago when I grudgingly gave Grown Ups 4/10? If you’ve forgotten what I had to say about it then check out the review here. And then forget it. Because my good nature is being sorely tested lately, predominantly by people who I spent far too much time being kind to when I should have just joined in with everyone else and poured on the scorn.

Grown Ups 2 is horrible. It’s not horrible as in “urgh, I don’t like Adam Sandler in anything so his films are all horrible to me”. It’s horrible in a “how the hell did this make money, and who is paying to see crap like this at the cinema?” way. I would have had more fun with this movie if it came with a free dose of the ebola virus. At least that way I would have felt SOMETHING! 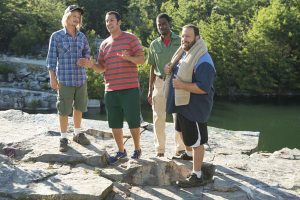 There’s even less of a plot this time around, despite how slim things were in the first movie, and what IS onscreen isn’t something I am going to share. No. Needless to say, leading man Adam Sandler is joined again by Kevin James, Chris Rock, David Spade, Salma Hayek, Maya Rudolph, Maria Bello, Steve Buscemi and Nick Swardson (a minor highlight, actually). Tim Meadows also joins the group. I can’t remember if he’s starred alongside Sandler before now and I’m not wasting another bit of time or energy checking. And Taylor Lautner and Milo Ventimiglia also pop up, defying the odds to become the other minor highlight of the film.

Dennis Dugan is directing lazily once more, while Sandler helps to provide a chronically unfunny script (co-written by Fred Wolf and Tim Herlihy) that can’t even wring one or two chuckles from his usual mix of recklessness, nostalgia for the 1980s and general tomfoolery. 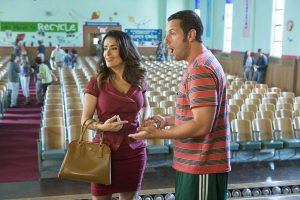 It’s clear that everyone involved is having a good time. This film, just like the first one, is an excuse for a bunch of people to get together and make each other laugh. Unfortunately, nobody bothers to make sure that the audience will also have a good time. This was a problem in the first movie, and it’s even more of a problem now.

It’s a shame that every Adam Sandler movie made recently is such a stinker, proving people right who have never liked him in the first place. Hell, I used to love him in the likes of Happy Gilmore and Billy Madison. The Waterboy was great fun, and he showed a talent for dramatic acting in both Punch Drunk Love and Spanglish. But those days are long gone, and now he shows a talent for picking up bigger paychecks that require a lot less effort. 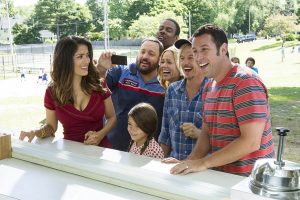