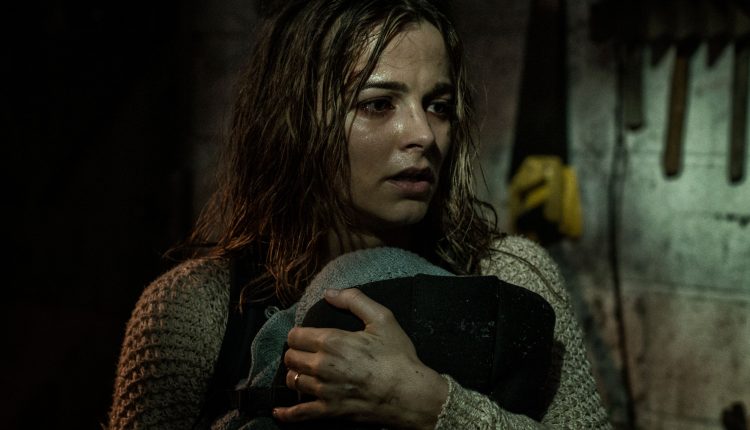 Mixing in some horror mythology that would impress Clive Barker with a plot reminiscent of The Ruins and Splinter, The Hallows may not win any awards for originality, yet it takes all of its main pieces and somehow creates an impressive, enjoyable horror that DOES feel fresh. It’s certainly a breath of fresh air compared to the glut of found footage and/or teen-friendly movies that we’ve seen recently. This is a straightforward, serious horror movie that doesn’t feel the need to include any recent trends or pander to the audience in any way as it moves from a tense first act to a sequence of jumps and thrills that lead up to a satisfying, if inevitably rather subdued, finale.

Joseph Mawle and Bojana Novakovic are the couple living in an isolated cottage in some Irish countryside. They are viewed as an unwanted presence, mainly because of the job that Mawle is there to do (connected to the surrounding woods), and therefore assume that scare stories being told to them are just that. Scare stories. Tales of woodland creatures getting revenge on trespassers, of babies stolen from their parents. But when things start to go bump, and crash, in the night it soon becomes obvious that these stories might not be all that fanciful. And the couple also have a young baby they must protect.

After honing his skills on shorts and music videos (including the excellent ‘Warrior’s Dance’ video), director Corin Hardy shows that he’s very much at ease with the feature format. There are some interesting visuals on display here, a standard soundtrack underlining the scares, and consistently great performances from all involved, especially important in emphasising the humanity at risk from the insidious attacks that our leads are trying to stave off. The script, co-written by Hardy and Felipe Marino, isn’t the strongest part of the movie, but it’s surprisingly effective in sketching out the local beliefs that viewers know will soon be out on display, and it also keeps everything moving along quickly enough to compensate for plotholes and gaps in logic.

Mawle and Novakovic are easy to root for, Michael McElhatton does well with his “you’re doomed” role, and Michael Smiley is always good to see onscreen, even if he’s only here for a minute or two (and in the role of a regular, upstanding policeman, no less). And then you have some great work being done by those responsible for the creature effects, so that’s another big plus.

In summary, The Hallow isn’t really anything that you haven’t seen before, but it manages to feel like it is. It’s a monster movie with serious intentions and a lot of heart. Think of it as Digging The Marrow without the shakycam and constant self-referential smugness.