What do Mahler, football, a newly discovered father and a seriously ill mother have in common? The answer is Victor (Romain Paul), a teenager living in a caravan on the beach whose lost his way. The Last Hammer Blow (Le dernier coup de mart eau) keeps things simple and ends up all the more engaging for it. As music once again provides the key ingredient, Alix Delaporte’s film neatly sidesteps trite traps along the way to deliver a surprisingly robust burst of heart-warming drama.

At first glance, there’s nothing unusual about Victor. Dressed in a replica football shirt, he’s seen early on watching a match with neighbours only to find his gaze wandering when fellow teenager Luna (Mireia Vilapuig) strolls by. So far, so teenage. His life is more complicated than that though. His mother Nadia (Clotilde Hesme) is seriously ill; cancer presumably as she wears a wig to cover her shaved head. He’s also been without a father all his life until now when this mystery figure has suddenly emerged in the shape of concert conductor Samuel Rovinski (Grégory Gadebois). Trapped in a cycle of impotent rage at his mother’s fate, and apathy at his own footballing prospects, only Samuel and the power of music offer a way through.

Delaporte deserves plaudits for successfully walking a tightrope over a number of dramatic clichés. It’s a miracle she remains standing after negotiating death, love and the value of life. Victor’s disconnection from life lies at the centre. He can react to his mother’s illness only with anger. Power to do anything else remains elusive. This induces a resignation that settles over other aspects of his life. With a big football trial coming up, he can barely be bothered to train and threatens to blow the day by exploding on pitch. 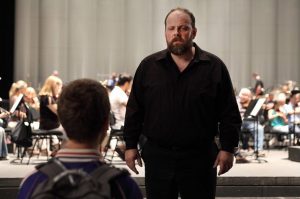 Here’s where Mahler comes in. Samuel’s in town preparing for a recital of the 6th Symphony. Their first meeting is hardly momentous, casual to the point of dismissal. Gradually, a connection grows, Samuel using the only thing he knows to forge a line of communication. The appalled look on his face when Victor claims not to have felt anything after listening in on a rehearsal forces him to embark on a rapid fire musical education. In no time, Victor is a captivated expert.

Perhaps too quickly. Soon, he’s playing sections from the two CDs he’s been given, pointing out the history behind the music for his mother. Delaporte makes it abundantly clear when he’s reconnected with the world again. While having his head shaved by Luna, music sparks up marking the return of feeling. The same happens on the football pitch pulling him out the mire in the nick of time. A couple of bursts of classical music and he’s on the straight and narrow again.

Still, with a winning performance from Paul, The Last Hammer Blow allows lessons to be learnt in an engagingly inoffensive manner. It won’t linger long in the memory but it’s a pleasant guest on the way through.