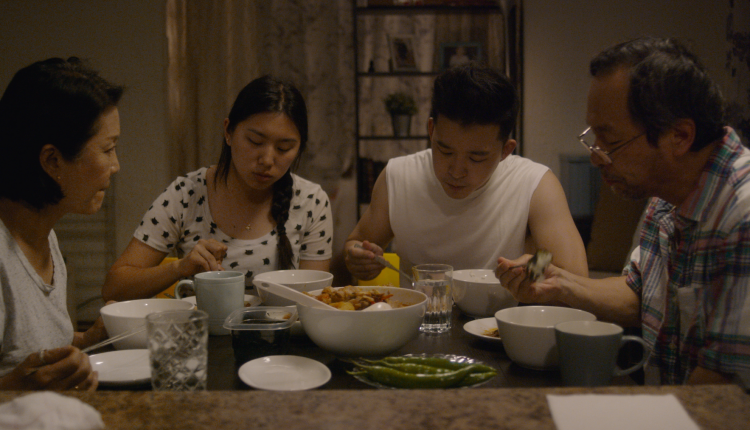 Happy Cleaners is the latest familial drama that follows the trials and tribulations of the Asian-American experience as tested through the two generational scopes of a Korean clan trying to run a dry cleaning business in a multicultural landscape of an over-populated Queens section of New York. From the vastly popular early 90s melodrama The Joy Luck Club to 2018’s quirky sensation Crazy Rich Asians the flavor of cinema has embraced the embodiment of Far East sentiments in terms of tradition, transition, and the tenacity of assimilation. Granted that Happy Cleaners does not necessarily bring anything new or distinctive to the table in terms of highlighting the immigration impact as depicted on American soil. Still, this is an indelible and intimate film that captures the wavering spirit of a particular family’s nucleus joined together through the surfacing conflict, clashing, and state of consciousness.

Co-directors/co-writers Julian Kim and Peter S. Lee resourcefully present a somber, straightforward portrait of a proud Korean family simply trying to get by within the shadows of American success and acceptance. It is a constant struggle for this particular family unit to stay on the same page. The elders believe in playing it safe when it comes to the finicky customers in particular–just nod with approval and keep a planted smile on the face. However, the offspring’s mentality is quite the contrast–they will not take any guff from disrespectful patrons because they are Americans too and worthy of consideration and decency. Collectively, Kim and Lee skillfully cough up the division among love ones quietly sparring with one another over the philosophy of business and belonging to the fabric of white American society. Interestingly, the observational tug-of-war as established by the film’s handlers is both stunningly poignant and quite sad in some instances.

Ultimately, Happy Cleaners is about the stress and strain of foreigners from all walks of life that want the elusive American validation through their contribution through hard work and perseverance. Unfortunately, the cost for such an expectation is mighty high courtesy to the degrees of intergenerational static that generates through differences of opinions and motivations. Do the old-school parents know best in terms of going with the flow as they cater to the American consumers in hopes of gaining continued financial support? Should their Americanized children be less brash and show more respect for the business despite the emasculation of the paying public? No doubt the quandary in Happy Cleaners is as compelling as it is contemplative.

Young Kevin (Yun Jeong) is the family rebel whose employment in the family dry cleaning business is hampered by the brief bad encounter with an argumentative customer. According to Kevin’s mother, her son’s dissatisfaction with the customer–a paying one at that–is unprofessional and not a smart move. She advises Kevin that he cannot afford to alienate white Americans in general much less the ones that frequent their business which keeps them marginally afloat financially. Basically, Kevin is just going to have to grin and bear it regardless as to what he deems is an indignity toward him. This is indicative of the maddening head butts that Kevin and his parents endure when it comes to protecting their business-related livelihood.

The pressure is on for Kevin and his parents as their small business has not shown any profit as of late. Kevin’s parents have been in the dry cleaning business for what seems like a lifetime already. Steadily, the dry cleaning business has dutifully put food on the table and provided for a stable home that has allowed this Korean family to survive and carry on. Alarmingly, the business has declined and is not showing any economic growth. Hence, it is understandable why the worried parents fear that Kevin’s disdain for the occasional pushy customer is detrimental to the dwindling business in the scheme of things. Although Kevin is entitled to his sense of pride not to bow to anyone in the wake of humiliation, his parents also are savvy in knowing how to get along even in the face of unwanted humility.

As if the constant strife of the concerned dry cleaning business’ questionable financial standing was not enough, nonwork-related tension is mounting up in several other ways. The parents, who harbored high hopes for their son to attend medical school as a chosen profession, are woefully disappointed when Kevin rejected the professional road they wanted him to travel. Kevin’s sister is another entire letdown as she financially fuels her emotionally stunted boyfriend who is also stuck in his brand of domestic entrapment. The parents now have their immediate future existence in doubt as their grown children are looking unable to care for them when that time arrives in retirement. Furthermore, their small dry cleaning business is falling by the wayside with no intentions on making any needed renovations to entice additional customers.

The familial frustrations in Happy Cleaners are clear cut as both Kim and Lee string together the anxieties, dramatic drudgery, and daily obstacles that overwhelm a migrant family simply trying to taste the slice of American pie that is not served as readily as believed. What is so thought-provoking are the identity issues and the instant mentality of debating whether or not traditional values are harmful or helpful to the countless immigrants that strive for America’s finicky approval. The complicated Korean-based family dynamics featured in Happy Cleaners is familiar in theme and structure but nevertheless gloriously telling.