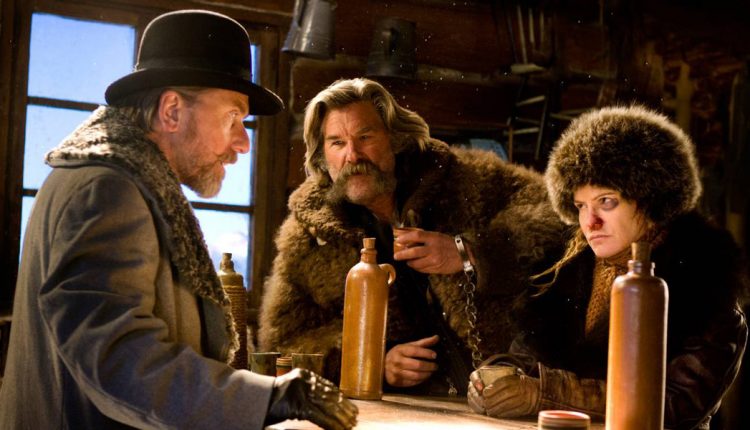 This is the Tarantino film that was almost never made. After being leaked in January 2014, the filmmaker quickly shelved the project before considering adapting it for the stage or a novel. However, he decided to make his ambitious project with one of his best ensemble casts to date.

Set after the US Civil War, The Hateful Eight revolves around a group of eight people who are snowed in an isolated stagecoach lodge during a heavy blizzard in Wyoming. Among them includes Major Marquis Warren (Samuel L. Jackson), John ‘The Hangman’ Ruth (Kurt Russell) and his bounty, criminal Daisy Domergue (Jennifer Jason Leigh), who is to be hanged. As the night progresses, Ruth suspects that someone in the cabin is secretly working to free Domergue and Warren tries to find out who it is before it is too late.

The blizzard isolates the characters and racks up the tension. Stuck together, no-one trusts the other – and each could just as easily be an added danger, as well as completely innocent. Is Mexican Bob really looking after the cabin for Sweet Dave and Minnie or is there a more sinister reason? Is Lost-Causer Mannix (Walton Goggins) really Red Rock’s new sheriff or just a bandit on the take? Is Ruth just paranoid or is someone really working to free Daisy from chains? As the blizzard gets worse, the atmosphere inside the cabin turns as frigid as outside and with an abundance of guns available, not everyone might survive the storm.

The Hateful Eight is slightly too long. At a running time of more than three hours, it’s a bit of a slog but the time is well-spent. The film has aspects of the ‘one-room play’ about it. The action takes place in the cabin and this has the effect of ensuring very little can be done in private. Each story plays out at its own pace, not rushed or hurried (but in some cases, a little too indulgent) to a blood-soaked conclusion.

The initially cordial atmosphere slowly enfolds as the mystery unravels, but the audience is left with bated breath for each chapter to finish to see what the preceding one will bring. Unlike his earlier features, Tarantino steers clear of his pop-culture dialogue and instead allows the script to drive the story, making his most compelling, well-structured feature yet.

Goggins, Jackson and Leigh deliver the strongest performances. Jackson is super-cool as Warren, whose lighthearted manner quickly dissipates due to badassery and unexpected cruelty. The tense standoff between him and General Smithers (Bruce Dern) highlights the strained social situation at the time, but gives Jackson his best monologue since Pulp Fiction. Jason Leigh bears the brunt of Ruth’s chauvinistic behaviour but Daisy’s devilish persona makes a lasting impression, making her a standout female Tarantino antagonist.

The Hateful Eight is ambitious, complex yet wildly entertaining.  For a 187-minute film, it’s worth it.