With a four minute running time, one location, two actors and minimal stylistic fuss, Haven is something of a miracle.

Written and directed by Kelly Fyffe-Marshall, it’s a film about children, about innocence and about pulling the rug out from under the feet of the audience, who may be surprised by how much impact such a small piece of work can have.

But then, that’s half the point.

Much like the little girl who provides the film’s emotional sting, you may think you have Haven pegged from the outset, but you will be left reeling by its end.

Expectations are set by the tone, both comical and laid back. A mother (Tika Simone)sits on her couch, laptop open and phone to ear, while her daughter (D’Evina Chatrie) plays in the room down the hall. She calls her daughter in, so she can brush her hair, while she continues her conversation. Talk turns to periods and suddenly, one remark from the daughter turns the film inside out.

To reveal the film’s developments would be to do a disservice to the audience. Indeed, coming to Haven cold leads to an extremely potent emotional impact, bolstered by great performances and a carefully considered screenplay, in which dialogue drives the story and delivers the most gut wrenching of punches.

Shot almost like a sketch, the camera remains observant throughout, moving slowly. Jordan Oram’s cinematography utilises natural light, bouncing off the whitest of walls, giving an almost clinical feel, whilst in the edit, the cuts are specific and the pace surprisingly unhurried for a film of this length.

But the style of the piece is in the writing.

It takes a great deal of bravery to utilise a comedic tone to wrong foot an audience, but Fyffe-Marshall does this brilliantly, and the sound design choice that plays over the end credits is positively chilling.

At once smart, confident and terrifyingly relevant, Haven is a film that treats its audience like bowling pins. Set them up to knock them down.

But be warned, the final punch will haunt you for weeks. 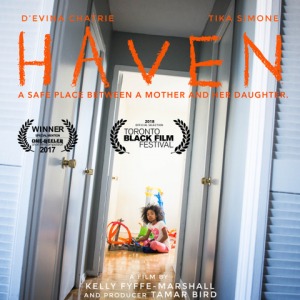 Haven is currently screening on the festival circuit.