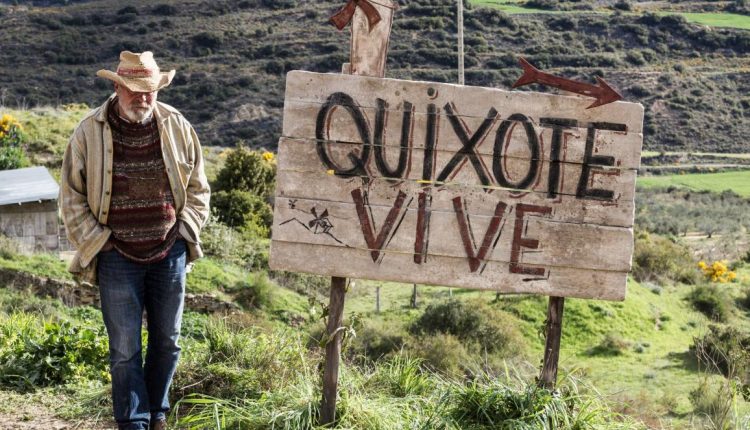 There is something monumentally Sisyphean about Terry Gilliam’s repeated attempts to adapt Miguel de Cervantes’ novel Don Quixote. Every time the boulder is rolled up the hill, it inevitably tumbles back down again. Gilliam’s final push to complete The Man Who Killed Don Quixote is the central focus of Keith Fulton and Louis Pepe’s documentary, concluding the journey first begun in Lost in La Mancha. In He Dreams of Giants, Gilliam reminds his new cast – now Jonathan Price, Adam Driver and Joana Ribeiro – how familiar he is with the screenplay. Every frame of the storyboard, every location and dialogue, Gilliam quips, has been etched into his mind throughout seven failed productions.

Gilliam’s stubborn refusal to admit defeat opens this follow-up documentary, and with new funding, new actors and the previous crew returning, the opportunity of completing the film presents itself once again. Of course, Gilliam is no stranger to troubled productions and financial crises: Brazil, The Adventures of Baron Munchausen and The Imaginarium of Doctor Parnassus, to name a few, all struggled with unexpected calamities. It’s possible the main curse of Gilliam’s adaptation is Cervantes’ novel, whose errant and fantastical quest has resisted adaptation for many years, reaching as far back as Orson Welles’ unfinished project from the late 1950s.

“The truth is, I don’t actually like making films,” Gilliam admits, and certainly filmmaking has never looked more ugly or desperate – least of all for Gilliam himself. The Pythonesque charm and youthfulness he possessed in early productions have wintered considerably by the time of He Dreams of Giants. Grizzled, squinting into the camera, and often verbally assaulting his crew, the long journey of production has taken its toll on the artist. This might just be the Masterclass in filmmaking every aspiring director and producer needs to see before taking the plunge.

Whilst Lost in La Mancha was produced before the completion of The Man Who Killed Don Quixote, He Dreams of Giants was produced afterwards, and despite the anxieties of the production being documented, there is some reassurance in knowing Gilliam finally made it. Although Fulton and Pepe shadow the production quietly, they have produced one of the most insightful accompaniments to a film in recent years, comparable to Les Blanks’ Burden of Dreams for Werner Herzog.

This might be one of the rare occasions where the “making of” feature is not only stronger than the film being documented, but also enhances any viewing of it. Filmmaking has never looked uglier, but how dull, quiet, and less imaginative the world would be without Terry Gilliam.

He Dreams of Giants is now available on BFI Player.