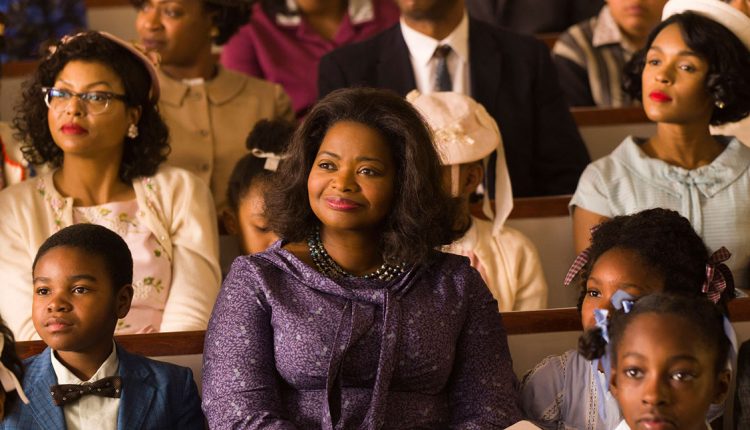 Films chronicling America’s troubled racial history broadly fall into two categories. They are either searing critiques of the injustices coloured people were forced to suffer or old-fashioned yarns which gloss over racial themes with a Hollywood sprinkling of powerful villains and disenfranchised heroes.

Hidden Figures, the true story of three black female mathematicians who helped Nasa fire an astronaut into Earth’s orbit for the first time, falls resoundingly into the latter. Proudly shinning a light on three brilliant women who were cruelly overlooked by history, it’s an engaging, entertaining, feel-good romp through 1960s America, but there’s a nagging sense that it’s considerable flaws have been drowned out by a wave of post-#Oscarsowhite controversy.

Taraji P. Henson, Octavia Spencer and Janelle Monáe play the trio of number boffins who work as ‘computers’ for Nasa’s space program. Henson gets the baulk of the screen time as Katherine, a quiet but gifted math whizz who is drafted to assist a previously all-white flight research team who are struggling to keep up with their Russian rivals in an intensifying space race. Even as her ground-breaking work pushes the mission back on track, Katherine is forced to endure any number of demeaning practices: she is not allowed to drink from the communal coffee pot, she is banned from attending briefing meetings and she must run half a mile in heels in order to use to nearest coloured bathroom.

It’s a similar story for her two equally-talented colleagues. Monáe’s sharp-witted Mary faces a court battle to gain permission enrol in a segregated school that will help her to achieve her dream of becoming an engineer. Dorothy (Spencer), meanwhile, has a fight on her hands to persuade Kirsten Dunst’s prickly supervisor to grant her the promotion she most definitely deserves.

Fans of cinematic clichés are well catered for in a story that seeks to paint the struggles of a racially divided nation with the broadest of strokes. This is the type of film where hissable bullies get what’s coming to them and the good guys get to make rousing speeches and grand symbolic gestures to whooping crowds. At one point, Kevin Costner’s gum-chomping Nasa chief smashes a ‘coloured bathroom’ sign and theatrically declares: “At Nasa, everyone pees the same colour.”

Perhaps this overly sentimental outlook is to be expected, especially considering director Theodore Melfi’s previous film was the supremely saccharine St. Vincent. There’s also an argument to be made for highlighting such a stoically defiant approach to racism, something which undoubtedly existed at the time, ahead of the more traditionally cinematic raging protest movements. The problem here is that this approach risks trivialising the challenges these three women had to overcome to be recognised.

This is most obviously felt in the lack of nuance in Katherine’s arc. She not only has to contend with institutional racism from her colleagues, but also has to balance the long hours with the responsibilities of being a single mother to three young girls and the minefield of dating a new man (in the admittedly irresistible form of Mahershala Ali dashing military man) after the death of her husband. Yet Melfi inadvertently treats these issues as mere frivolities that are easily overcome by a spot of flirtatious dancing and a quick snog over the washing-up.

It’s disappointing because the performances, including those of a supporting cast hugely under-served by one-dimensional characters, are worthy of far stronger material. Hidden Figures is an unashamedly upbeat, heart-warming and enjoyable movie that delivers a plea for equality that’s undoubtedly important in the current political climate. Whether it’s also worthy such vaunted critical and ceremonial praise is another matter entirely.