It’s hard to think of a much-loved action movie that’s as silly as Highlander, but that just might be part of its main appeal. Even before we get to the set-pieces, it’s worth remembering that this is the movie that decided to cast a well-known French actor (American by birth) as the Scottish male lead, the most famous cinematic Scotsman of his generation in the role of an Egyptian . . . . . . . Spaniard, and Clancy Brown as, well, as the completely over the top and completely brilliant main villain of the piece. 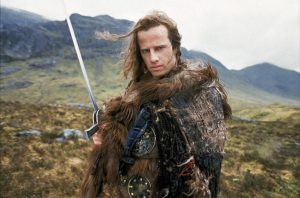 What’s the story? Well, as is shown in flashback, Christopher Lambert is Connor MacLeod, a Highlander who was fatally wounded in a major battle. Yet he lives. His family and friends proclaim it the work of the devil and drive him from his home, leaving him to make a new life for himself elsewhere. One day, while he is spending some time with the new love of his life, a flamboyant stranger (Sean Connery, as Juan Sanchez Villa-Lobos Ramirez, a name I could barely type out with a straight face, considering how resolutely Scottish Mr. Connery remains in his performance) interrupts proceedings to tell him the truth – he is now an immortal. Unfortunately, there can be only one. Immortals can only be killed by decapitation, and there’s one man in particular – The Kurgan, played by Clancy Brown – who wants to see as many heads rolling as possible. When the film moves back to the modern age it becomes clear that there aren’t too many immortals left. The Kurgan wants his victory. He wants to be the one. Connor, however, isn’t ready to lose his head just yet.

Directed by Russell Mulcahy, Highlander gets so much right that it wraps up the more nonsensical aspects brilliantly. First of all, a lot of the camerawork is fantastic, especially many of the transitions from scene to scene (often from past to present). The soundtrack, by Queen, is one of the best I can think of for a sci-fi action movie. It’s a shame that the other music, by Michael Kames, is often forgotten by those praising the soundtrack, but the fact is that everything becomes one pleasing layer of audio greatness, so everyone involved deserves plenty of praise.

Gregory Widen, Peter Bellwood and Larry Ferguson are the people responsible for the script, and they seem to have brainstormed the best adventure story for boys that they could come up with. A lot of it may not make sense, although it all holds together a lot better than any of the sequels, but the writers keep the emphasis on action and fun, delivering both in spades.

As for that quirky cast, the accents may be all over the place, but the performances are all spirited enough and completely in line with the well-balanced tone of the material. Brown is one of the great villains of modern cinema, taking such pleasure in his killing that he becomes the character that you most look forward to seeing onscreen in the second half of the film. Roxanne Hart is just fine as the nosy forensic scientist who also happens to be an expert in metallurgy, and viewers can also have fun looking out for Sheila Gish, Alan North, Jon Polito, Celia Imrie and James Cosmo. 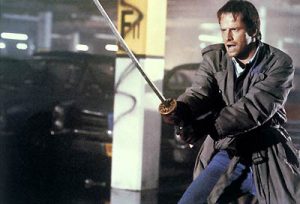