Over the past twenty years, Hong Sang-soo has worked prolifically to stake a claim as one of the more interesting auteurs examining human relationships in world cinema. His steady success rate makes his films a staple of the international film festival circuit, hence the opening here at Venice for Hill of Freedom. In this case though, a longer gestation period wouldn’t have gone amiss. Hill of Freedom is a wisp of a film, so fragile it’s likely to disintegrate in sunlight.

The title refers to a tidy café in Seoul frequented by Mori (Ryo Kase) who’s returned from his native Japan to reconnect with a lost love. Sang-soo frames his story through a series of letters written to the object of Mori’s affections, Kwon (Seo Young-hwa). To justify the jumbled timeframe, she drops them early on, and without a postmark is forced to read in random order. It’s a clumsy tool applied without the clarity needed to distinguish the frequent switches between events. 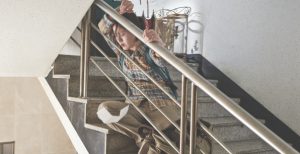 Moving back and forth in time, Mori befriends Sang-won (Kim Eui-sung) the debt-laden nephew of his guest house owner and starts an awkward relationship with Young-sun (Moon So-ri) who works in the café that he waits in so religiously. The most startling thing about Hill of Freedom, all the more so given Sang-soo’s usual sure-footedness in this realm, is the tin ear he’s suddenly developed for dialogue. Delivered mostly in English, nearly every conversation is awkward, a stilted fumbling for words. It’s as if Ricky Gervais and Stephen Merchant wrote all the social interactions and then expressly removed the comedy afterwards.

Mori himself is a strange fish. Perpetually subdued, he strolls around Seoul a man out of place. Sleeping in until late in the afternoon, and without gainful employment or apparently any self-respect, he still seems inexplicably magnetic to those around him. Most disappointingly, Sang-soo’s female characters have been shorn of their richness. Young-sun comes across a clumsy airhead while Kwon is an irrelevancy outside her official role as framing device.

Hill of Freedom is not without moments of charm. Eui-sung gets all the highlights as the feckless friend, randomly bursting into argument with fellow guests and utterly unrealistic about his future. There’s also a nice cameo from Young-sun’s neglectful boyfriend, imposing himself on a situation with not a modicum of tact or politeness.

It’s not enough to rescue a thoroughly damp squib from failing to fire. There’s potential bubbling around in Hill of Freedom but this time out Sang-soo has got the mixture all wrong.