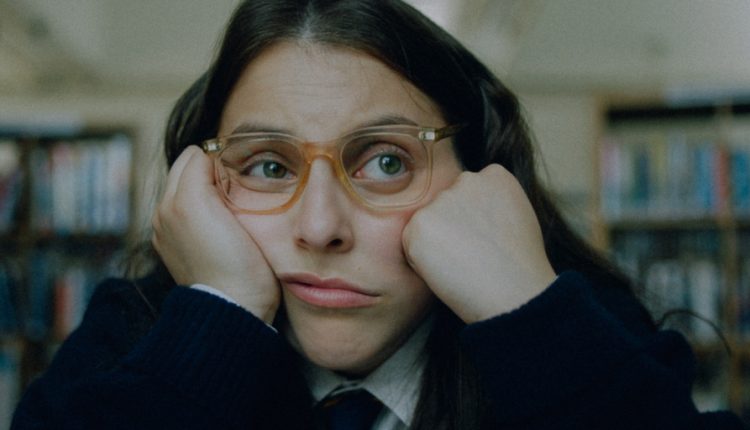 Beanie Feldstein faces up to Sleeping With The NME in the big screen adaptation of Caitlin Moran’s semi-autobiographical novel How To Build A Girl.

Feldstein plays Johanna Morrigan, a 14 year-old girl desperate to leave the shackles of her family, school and dreary Wolverhampton behind. To go forth and fulfill her dreams of becoming a writer. When she gets the chance to work for a music magazine, she is thrown into a world of sex, drugs and rock ‘n’ roll. A world that is at odds with her dreamy teenage girl, Smash Hits-style of prose.

Told that nice girls finish last in this man’s world, she reinvents herself as Dolly Wilde. A woman whose poison pen is mightier than the sword. Sentencing bands to death by a thousand cuts in 250 words or less.

For a film where the central character has to develop a unique voice in order to stand out, the final product is crushingly formulaic. When Caitlin Moran adapted How To Build A Girl, it is as though she googled “how to build a screenplay”. Then cut and pasted plot points and structure from other coming-of-age movies and films about journalism e.g. Almost Famous.

Does the writer make a deep connection and fall for their first big interview? Check. Does the artist confide in them only for the writer to use this secret to further their own career? Check. Does the lead character overhear people being mean about them and discover that this new life is not they want and return home to the family they discarded when fame came along? Check.

It has all been seen and done before, and to a much higher standard. The result is a movie that resembles an album of terrible cover versions of your favourite songs. A viewing experience similar to watching a group of celebrities butcher John Lennon’s Imagine on Twitter.

Beanie Feldstein, so great in Lady Bird and Booksmart, does deliver a strong, committed performance as Johanna/Dolly as she travels the length and breadth of the country reviewing bands. It is just a pity that is exactly what her accent does as well.

Her performance is sadly not enough to save a film which is built on foundations shakier than Shakin’ Stevens singing Shake It Off inside a Shake Shack.

In one scene, the staff of the music magazine mercilessly decide the fate of songs, bands and albums by kangaroo court. Any record not meeting their quality control is thrown off the roof and blown up clay pigeon style.

Sadly the same was not done with How To Build A Girl which deserved to be put out of its misery. Instead the audience to forced to suffer on the long and winding road towards its slow, painful death.

How To Build A Girl is available on Prime Video from Friday 24 July.