I Kill Giants (2017) has one of those interesting, attention-grabbing titles.  What does it mean?  Who kills giants?  Why would you want to?  Is it really about giants?  With so many questions and pre-film theories- does it hold up?  As these questions hopefully show, our imagination is such a powerful hook, one which producer Chris Columbus and director Anders Walter use so efficiently. 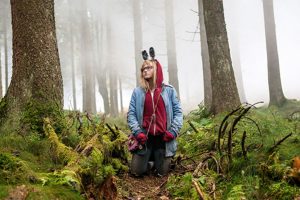 Opens with a smooth, steady pace, hinting at something unusual happening.  Encapulates the character’s mix of maturity and innocence- scraping off green powder from a mushroom / mixing with a yellow sweet and wearing bunny rabbit ears- inner conflict is present from the start- the audience is allowed to know this girl is a complex character.  And then we get first contact with some gigantic, something other-worldly.

I Kill Giants tells the story of Barbara (Madison Wolfe – Joy, Trumbo), a teenage girl who deftly escapes the realities of her troubled family and school life retreating into a magical realm fighting evil ‘giants’  who attack her quiet coastal town.

Director Anders Walter uses the setting in the opening scenes as a fantastic preluding metaphor for the contrast in Barbara’s life: the dense, dark-green woodland is a stark comparison to the coastal town in which she lives and this visual clue helps to establish her character all the more.

Barbara is the young protagonist of the film.  Wolfe plays the role remarkably well, showing strength and vulnerability well throughout the film.  She is instantly a relatable character who wins the audience’s empathy (and in some cases sympathy) throughout many of the films scenes, including her overhearing her brother and sister arguing about her.  Both siblings are the standard fare- disparaging ‘cool’ brother who insults as much as possible (including the original “nerd girl”) and caring but ultimately busy older sister who wants to help and deep down cares.  Other characters are well acted and do not detract from plot

All bullies are the same, as soon as you stand up to them they crumble. Just like giants.

Its hard not to write a huge character study about Barbara: testament to the incredible acting skills and performance of Wolfe; the well-written script and story of the film.  This truly has the potential to become a good study-film when discussing characters and motives.  The awkward initial encounter between Barbara and Sophia (Sydney Wade) feels natural and highlights a sense of Barbara’s distrust of any one her age (we’ll come to that later).

Her school.  Like many “different” children, she’s bullied and singled out by many and we get to see why she creates this imaginary world to cope with the harsh reality she faces.  Schools tough, but tougher for her.  Yet, with the help of Sophia and her school councellor, Mrs. Mollé (Zoe Saldana –  Guardians of the Galaxy), she is able to face her fears and we get to see how she develops and grows through the film.

A strong, hard-hitting, character-driven story with impressive CGI which demands multiple watches, I Kill Giants is a must-watch.  With only some moments of magic becoming a bit too heavy, I Kill Giants is most certainly a film to recommend.  Having never even heard of the graphic novels, you will still find this film very enjoyable and satisfying.  With many meanings and messages throughout, this tale of an individual standing up to be herself should inspire us to all be ourselves.

A brilliant fantasy tale of growth, strength and killing giants.

Still not convinced?  Check out the trailer here.

I Kill Giants is available from 6 May on UK digital platforms, including iTunes.