James Gray, grandson of Russian Jewish immigrants to New York, has made a film about a Polish Catholic woman in the early Prohibition era who runs afoul of an exploiter who saves her from being deported at Ellis Island in exchange for becoming a prostitute. It’s like indentured servitude. Her sister was put in the hospital with TB and — well, it’s a long, sad story. And it’s told for us through Marion Cotillard as Ewa, the Polish woman, Joaquin Phoenix as Bruno Weiss, the “impresario,” and Jeremy Renner as Bruno’s magician cousin, Emil, AKA Orlando. They deliver, especially the ever-soulful Cotillard, who even acts some of her scenes convincingly in Polish. But a story like this should be epic, and intense, and rich in adventures, and Gray’s screenplay, co-written with Ric Menello (who collaborated on his fine Two Lovers) never quite finds tone or momentum. What we get are authentic details, sepia tints, handsome photography and delicate lighting. It’s enough to set a mood, almost even cast a spell. But we get nowhere to go with it.

That’s the point, of course: Gray takes his time to lovingly create a mood in which a woman is trapped, but has the fortitude and moral strength to survive squalid circumstances. Ewa’s behaviour on board the ship reportedly was improper (the men were brutal on the unprotected women), and her sister’s being quarantined means she must struggle to stay in the country and somehow by nearby to help. Bruno comes along when needed, with undefined connections with Immigration authorities, and gets her released into his care. Both actors are interesting together, Phoenix a mixture of kindly and exploitative, Cotillard a roiling blend of resentment and gratitude. What Gray’s aiming at is a portrait of forgiveness. He’s said that’s why he chose to focus on a Catholic woman rather than the Jews of his own family. He’s interested in compromises and moral complexity and the willingness to acknowledge indebtedness even when the benefactor had questionable motives. 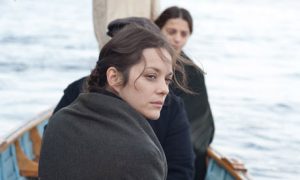 This, of course, isn’t an action movie. A return to Ellis Island to see Ewa’s sister, with a magic show (meaningfully involving levitation) involving the cousin (Renner) and singing performance by Caruso, and a couple of abortive trips by Ewa to her aunt in Brooklyn; even dramatic fights between Emil and Bruno, who begin to compete for Ewa’s attentions, still don’t keep the placid trajectory from seeming a bit tame and static. In a way Gray is still thinking in the dualistic terms of Two Lovers. And maybe he ought to have stayed more that way, instead of introducing the competition for Ewa between Phoenix and Renner. The latter hasn’t the heft of Phoenix as a personality, and though his fly-by-night character, a trickster and gambler who yet claims to be more of a decent fellow, is a new departure for Renner and interesting casting, the subplot just seems like a distraction. 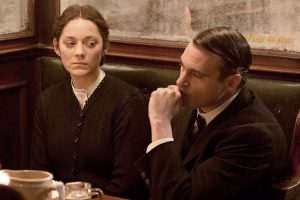 People are saying this affirms Gray’s classicism as a filmmaker inspired by golden decades of Hollywood (the Fifties? Seventies?), but his old-fashioned-ness had more sex appeal when he dealt with gangsters. Cotillard can never do wrong and Joaquin Phoenix remains an actor with an odd unexpected edge, but this seems like simply an impressive-looking wrong turn.

The Immigrant debuted at Cannes May 2013, with subsequent showings at a number of international film festivals, including New York, at Lincoln Center where it was screened for this review.