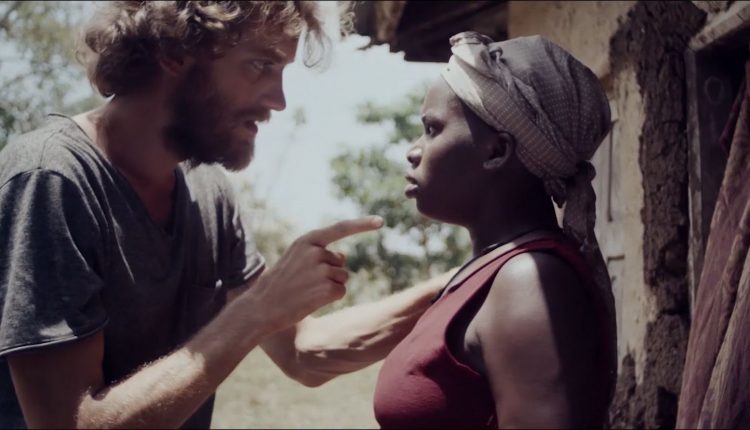 When American drug smuggler Hugo (Nicolas Fagerberg) finds himself in debt to a local dealer, he ventures to Uganda to secure a mystical drug called Buluu that could be the answer to his financial complications. However, he soon finds himself too involved in the lives of the locals, using the drug Bulu to help him see into the future.

Imperial Blue is a trippy thriller that blends reality and fantasy; grounding its mind-bending concept in a harsh tale of deception and morality. The characters are bold and colourful, especially when the film takes us deep into Africa and as the film would like us to believe, it is these actors that are the real stars of the show. Sisters Kisakye (Ester Tebandeke) and Angela (Rehema Nanfuka) are the true centres of this story and it is their commanding and often understated performances that carry this film.

This is a film of dramatic oppositions, where Hugo sticks out like an awkward sore thumb. As the only white man around he struggles to gain the trust of the people around him. He’s not welcomed with open arms but kept at arms-length. They are intrigued, but suspicious, of his entrance in their lives. Sure, he’s looking to exploit them for their dreamy drug, but he does try to do the right thing. Sometimes, anyway.

The drug Bulu allows its users a glimpse into the future, something that Hugo uses to help win over the locals. A couple of his drug-induced visions show him how he can play the hero and he uses that to his advantage. Whether this is Imperial Blue showing the white man saving the poor, struggling black community or poking fun at this white man’s obsession with being a saviour, is down to the viewer. I hope to believe the latter, because Hugo is such an unlikeable character it is impossible to even see him as a kind of antihero.

He finds almost allies in two sisters, but their agendas are opposed. Angela will stop at nothing to make the big bucks, but Christian Kisakye tries and struggles to do the right thing. “A good Christian never deals drugs” she is told, but with her town comes under threat, she realises that sometimes the end can justify the means. Enter Hugo, who could be the answer to her problems, but obviously, he comes with his own set of complications.

Imperial Blue is a unique, if forgettable viewing experience. It’s often too slow for its own good and it’s easy to imagine a casual viewer not succumbing to its genre-escaping story of drugs and community. It’s a well-acted and well-shot piece that will be praised by those that appreciate gorgeous landscapes. However, those that prefer their drug deals more fast-paced and packed with threat, will probably find little to love in Imperial Blue’s strange, thoughtful exploration.