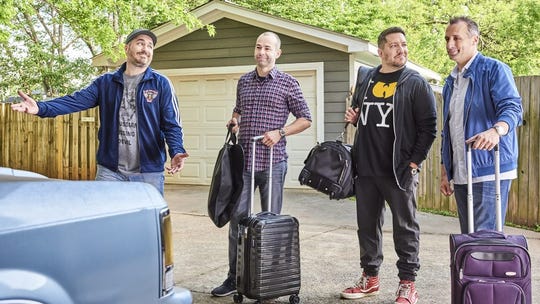 Evidently, the lethal combination of the insufferable man-child and the ridiculous exploits involving asinine stunts and humiliation from the boob tube transferred to the big screen was not only meant for the outrageous and outlandish daredevil numbskulls from 2002’s prankster puff piece Jackass: The Movie. Now nearly two decades later Johnny Knoxville and his band of bonecrushers have inspired (to a much lesser degree the exaggerated over-the-top moronic mayhem) a quartet of imitators to bring their eye-rolling shenanigans to the forefront for their rabid fans to engage with pure perverse delight. Ultimately, this cruel impractical joke is on all of us in terms of truTV’s long-running cable programming in reference to crude cut-ups in Joe, “Murr”, “Q”, and Sal.

Director Chris Henchy and the so-called New York-based funny foursome known to TV audiences as the Impractical Jokers bring their brand of nonsensical gags to fortify the sketchy cinema silliness in the needlessly distracting Impractical Jokers: The Movie. Henchy and the movie’s stars/co-writers Joe Gatto, James Murray, Brian Quinn, and Salvatore Vulcano look to bring some off-hand irreverence of pranks in an attempt to elaborate on the zany stupidity that has fed the goofy-minded appetite of their fandom for eight seasons. Unfortunately, the avid jokesters and the clueless chaos they try to reinforce in the pointless pratfall that is Impractical Jokers: The Movie is about as amusing as sitting on a whoppie cushion filled with chocolate filling.

For those not familiar with these merry misfits and their preoccupation with with playing embarrassing jokes among themselves and on others the set-up is simple: long-time buddies Joe, Q, Sal and Murr challenge each other through a series of “innocent fun” trickery. One of the oddballs are dared to partake in a witty stunt with an unaware target while the remaining trio look on from a distance to determine if the on-going stunt was completed. There is an occasional sense of comical comeuppance when the foolish task gone awry spells devilish disaster for assigned joker that fails his mission for mockery. Although this flimsy format fits the convenient banality of the small screen for giddy Impractical enthusiasts the forced absurdity woefully misses the mark in this numbing 92-minute gag reel that never really feels biting in its wacky result.

The utterly simplistic Impractical Jokers: The Movie offers nothing remotely stimulating in laughter or lunacy. One would not mind if Henchy and the mischievous Staten Island pals skillfully cooked something up worth the fuss of frivolity for box office distinction. Sadly, the perfunctory proceedings demonstrated in the clunky movie could have been yet another arbitrary episodic bit destined for cable television eyes. The idiocy reflected in this big screen toothless romp does not justify Impractical nation to slap down big bucks for something they routinely witness on a weekly basis in the comfort of their own living room. At least the aforementioned Jackass: The Movie crew had the respect for stepping up the moronic madcap antics for their devoted fans and a broader movie audience.

What passes for a frothy premise in the baseless movie version of Impractical centers around the wise-cracking group trying to catch a Paula Abdul concert held in Miami (the singer-actress-TV personality Abdul does make an appearance to toil in this chuckling mess). There are only three backstage passes available for an opportunity to cozy up with the sultry performer. So who of the four will miss out and be left behind in the dust? How can this dilemma get settled? You guessed it: the boys must resort to their bag of juvenile tricks and undergo a string of joke-ridden obstacles to determine which unlucky member is deprived of seeing the fetching Paula Abdul up close and personal. This is edge-of-your seat stuff, right?

The in-built admirers of the cockeyed cohorts most likely will digest this shotty session of crude side-splitting humor with unapologetic ease. As for the rest of us, Impractical Jokers: The Movie will exhaustingly grate on the nerves and leave one wondering just why this dismissive hiccup of hilarity was even conceived in the first place? It is nice to see that Joe, Q, Sal, and Murr crack each other up to ticklish smthereens. The pithy punchline may crunch their comical cookies to no end but this uninspired celluloid impractical joke is no laughing matter.