by Troy Balmayer
in Film Review

In the Fade tells a powerful story about a grieving mother striving to find justice. In a way, this release fits nicely with the recent trend of revenge flicks centred on a woman making damn sure they aren’t just a damsel in distress. Teresa Palmer used her wiles in Berlin Syndrome and Matilda Lutz became a feisty warrior in Revenge.  Now, it’s Diane Kruger’s turn to prove that woman deserve strong leading roles.

Katja Sekerci (Kruger) helps keep the books for her Kurdish’s husbands tax office business. She and Nuri (Numan Acar) have a little boy called Rocco, but one apparently normal day as Katja leaves the office and heads to a spa with her friend ends up in tragedy. She finds out that a bomb was set off in the location of the workplace and her husband and son have been killed by the blast.

Director and writer Faith Akin tells this film through three chapters. Each one comes with a stamp of visual storytelling that helps track with the growing fire within Katja, as she hopes to get some semblance of justice for her murdered family. The first chapter focuses on relatives and home life is grey and backed by a permanent rainstorm which may be a cliche but it definitely works in making her mourning that touch more depressing. As the story goes into the second chapter; my favourite section of the film, we’re presented with a tiled, gleaming white courtroom. The drama which unfolds in this location is elevated by the clinical, almost showroom aspect of the court. Then as Katja takes action into her own hands, we’re by the sea and a burning sun helps her glow, an unstoppable need is within her now.

I feel the film is let down slightly by this last act, there’s less tension and the end result is a soap drama blow-out that didn’t shock like it had the right to. Gladly; I like a good courtroom shuffle and In the Fade has a meaty back and forth of defence and prosecution that is scripted well. There’s a real feeling of frustration at the system and Akin gifts moments in this chapter dialogue that either make you want to clap or boo. 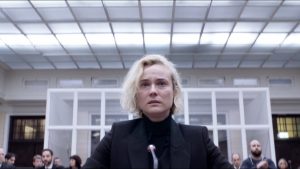 By a country mile and a half, the most impressive quality of the film is Diane Kruger (seen in the similarly arresting thriller – Maryland aka Disorder). There’s a force shimmering behind her eyes that shakes just like her body does upon hearing the news for the first time. She’s phenomenal throughout, with a broken spirit that steals the screen which slowly manifests into a more resilient carrier of justice. She retains a believable vulnerability but after a rising like a bloody phoenix, Kruger gives Katja a solid punch of motherly duty.

In the Fade does unfortunately tread down some cliched paths of revenge movies but aside from a weaker chapter that travels the action to another setting, this is a gripping thriller with a gut punch of emotion and a punishing turn for Kruger which she handles greatly.