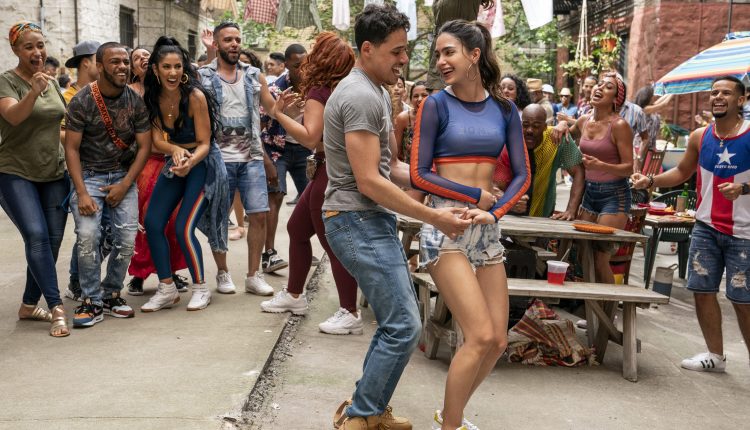 In 2008, Lin Manuel Miranda’s first musical debuted on Broadway. Based on a book by playwright Quiara Alegría Hudes, In the Heights quickly made Miranda a star and the youngest composer to win a Tony Award. Over ten years later, a film adaptation of this New York-based musical is hitting cinemas with Hudes acting as screenwriter.

Directed by Crazy Rich Asians‘ Jon M. Chu and starring an ensemble cast that includes Anthony Ramos, Corey Hawkins, Leslie Grace and Jimmy Smits, In the Heights focuses on a mostly Dominican community in Washington Heights. Most of the film is told by bodega owner Usnavi (Ramos), who dreams of a better life in the Dominican Republic, despite a regular stream of customers such as his friend Benny (Hawkins), cab operator Kevin (Smits) and the beautiful yet unattainable Vanessa (Melissa Barrera).

With a lengthy runtime of 143 minutes, In the Heights tries to highlight each character. But with such a large cast to showcase, not to mention the hundreds of extras, the plot offers insufficient clarity from the harsher aspects of Latina culture such as social ignorance, classism and the struggles of being an immigrant. The personal identity and confidence struggles of booksmart Nina (Grace) feels pushed aside to ‘accommodate’ her romantic relationship with Benny. In addition, Kevin’s financial issues aren’t fully explored while Vanessa’s dreams of moving out and becoming a fashion designer are played down until a somewhat cliché scene. As In the Heights is a musical, its focus justifiably sits with its musical numbers so it subsequently doesn’t convey the everyday hardships faced by immigrants and people of colour.

At the risk of being cheesy, In the Heights offers a positivity that is accentuated by matriarch ‘Abuela’ Claudia (Olga Merediz), who believes that ‘paciencia y fe’ – patience and faith – will overcome life’s struggles. Abiding by this uplifting motto, In the Heights is a celebration of Latin Americans amid its conventional backdrop. On one side, there are children playing in the street, a constant flow of banter in the local hair salon, and people greeting each other across traffic. Yet we also see intimate family dinners; vintage, hand-stitched handkerchiefs; and candle-lit vigils – all the while, the residents unconditionally support, respect and celebrate together. This is more than a community – it is a family, and Hudes reinforces this sentiment throughout the film amid tender conversations and amusing interactions.

In his latest film, Chu’s direction surpasses his work on Crazy Rich Asians and ambitiously translates Miranda’s musical from the stage to the streets. Shooting on location in Washington Heights, the camerawork seamlessly sweeps throughout every scene with each beat meticulously matching the intense choreography and fast-paced songs. Combined with the passion-filled performances of its incredibly talented cast, In the Heights becomes a multisensory symphony that raises the standard of stage-to-film adaptations.

Filled with colour and pride, In the Heights is a burst of sunshine. Its songs and dance numbers are so infectiously joyful, it sets the bar for not only this year’s summer of cinema but also the modern-day musical.

In the Heights is out in UK cinemas from 18th June.